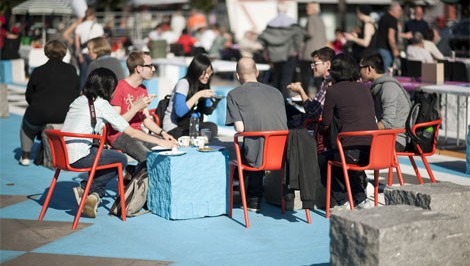 Almost two months ago Belinda and I moved to Hamar for the implementation of dreamhamar participatory process. Prior to our moving, throughout 4 months, I was working together with the other team members in transforming and developing the project from competition to realization phase, re-inventing it and trying to fit it to a new time table, resources and expectations.

In July we already had a fixed plan for realizing the participatory project during the following 4 months in Hamar – budget, schedule, activities descriptions, team requirements. I felt reassured as there was a clear idea of what we were planning to do, how we are going to do it, how much it will cost, and so on.
Just before moving to Hamar, Belinda and I had a long talk about the coordination of the coming months. One sentence stayed with me – “We can formulate plans and make them happen, but we must remember to keep it open and flexible for spontaneous actions” said Belinda, emphasizing how important it is to keep the project and ourselves flexible for absorbing the ongoing experiences, not only for the results, but during the process itself. At the end of the meeting I only had one word written in my notebook – ‘flexibility’. We laughed about it, as we were talking for hours about so many issues and that was the only thing that stroked me. The truth was that at first I was a bit worried, thinking all this preparation was not enough as so many elements were still unknown.

It wasn’t an easy task for me. Educated as an architect and urban designer I have the same experience as most architects have – dealing with projects shifting from conception to realization. Up until now any project I have worked on had a similar way of developing: Meeting he clients, receiving the programme, site and budget, researching and developing it with other experts, making it work together in the most creative and innovative way.

With dreamhamar, the network design methods, and the fact that we are going to be physically onsite, the project is due to undergo many alterations in addition to the ones that usually take place.

“Life is what happens to you while you’re busy making other plans” said John Lennon, This is what I feel is happening in Hamar. We have made preliminary design, we are holding workshops and other activities locally and globally – some of them were planned, some of them are spontaneous -, but what really matters is the community that is bein created around Stortorget Square through this process. To build a square we need to build a community first. A community is the foundation of a square. And the truth is, that the steps for building a community are impossible to plan. We can provide the setting, we can offer activities, but is up to you, to the people, to create that community or not.

For me, an architect, this is also about learning from Hamar. I can see Hamariens looking at themselves, defining themselves. I am also an outsider looking at and trying to understand Hamar. Like the pizza network design style, it is about tasting the igredients before mixing them together, and about getting people to think, work and enjoy a pizza long before it gets in the in the oven.

People are curious about me too. Some of them have asked me “What do you dream for Hamar?” When I’m gone and all the plans are due, I dream that this community will prosper and nurture the square. I hope they will further develope the idea of Hamar, and that the square will be the milestone that brought together the community, now that our lifestyle makes us be closer to places and people far away while the streets are empty and squares underused.

As I see it, dreamhamar is a project that goes beyond the workshops and the pure participation process. It is about cherishing a community, about finding excuses to meet up and talk, with your neighbour and from a guy from London or Madrid interested in this unique project – Hamar is a pioneer, giving the community this degree of power is not common.

In summary, dreamhamar is about getting together to work on a mutual cause.

This post was originally published on Hamar Arbeiderblad, the 12th of October, page 4-5 printed edition.