a proposal for stortorget by agata ruchlewicz-dzianach

My proposal relates closely to my posts which I published during the workshop. As I tried to focus on the aspects which are the most interesting to me and I enriched them with the knowledge from the open-sessions and from other participants (from both workshops, Hamar experience and on-site workshops also), for a final proposal I further follow this way of working. During the whole workshop I explored so many fields (much more then I expected) because of inspiring power of network collaboration. So, for a first step the final proposal, I decide to do a kind of summing-up of thoughts and ideas.

Reading, searching, exploring and archiving I found a network process really inspiring again. What I find always a hard work to do, it is to work alone without any feedback. Often in the middle of the work, you could be/feel lost. But on the other hand, with a lot of feedback, you could be overloaded. This is always a challenge – a problem of organizing a working process. As I’m rather working normally as a freelancer, I often have opportunity to work with people whom I did not know before. This time, it was the first time working in a network in online mode, and I feel happy to be involved and I see a huge potential in it. It’s always a pending question where is a place for online participant/workers and how deep they can be involved into a process, without being in the real-place. However, finally I can frankly say that I’m also dreaming about a Hamar now – that’s a surprising feeling 🙂

As my final proposal, I decided to create a kind of catalogue cards which could serve as a start point for a concrete sketches for a square. I consider that often it lacks of this kind of things in a design process and the designed items like furnishing, lighting, pavements etc. are out of context in the special space>place.
I prepared those cards not only on the level of thinking about the material things – describing physical aspects, but also thinking about the activities and a participative process around the square.

The first of them describes the physical aspects. It has been created to answer to the problem of linking the square with the buildings around on the aestetic level. I made a card which contains the main characteristics of material things. They are in a form of visual list of materials which are used directly on the square (data has been collected from the preliminary design phase and from photos). I divided them into tree main groups: colours, materials and compositions. 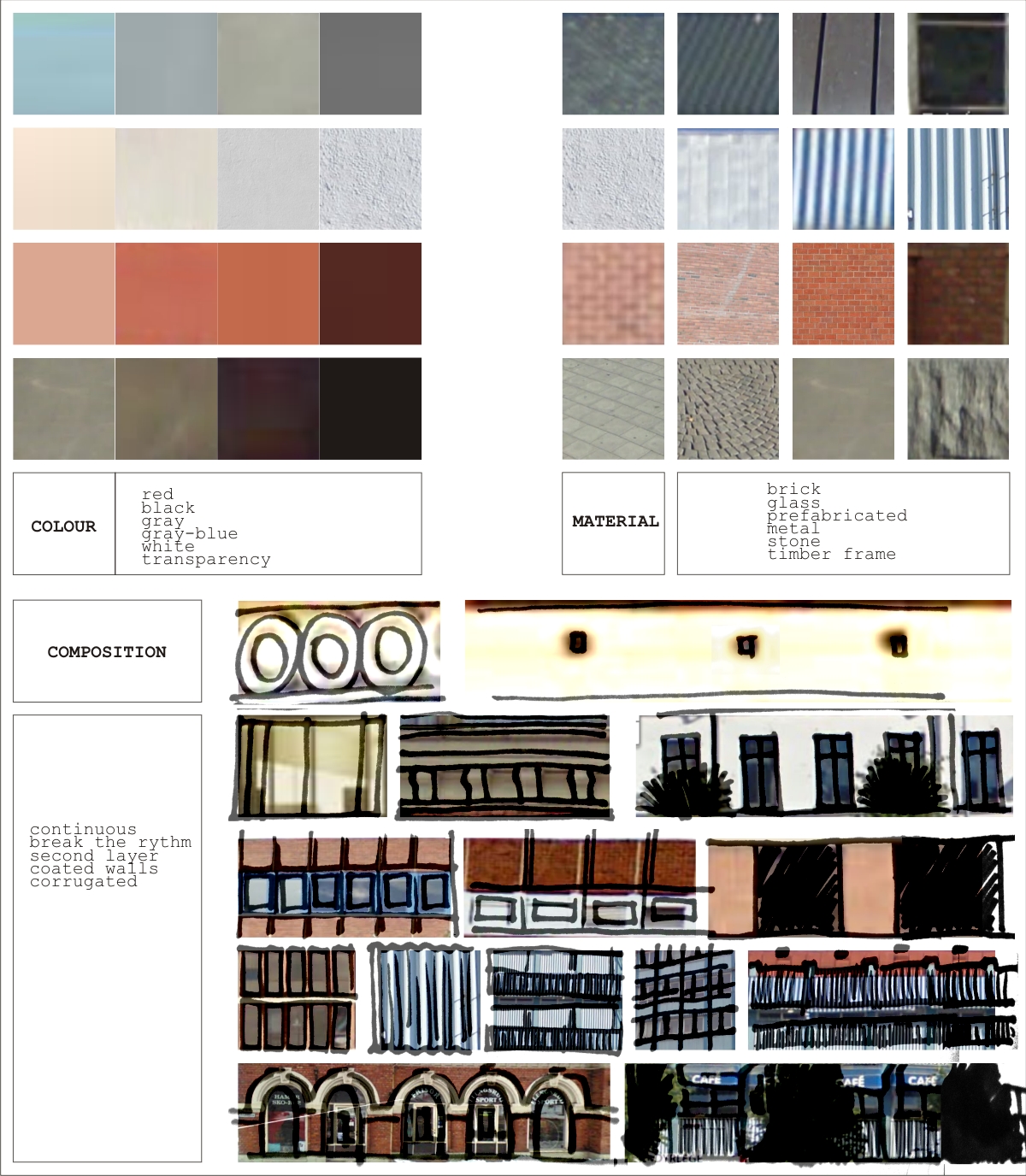 Before creating the card with activities, I decided to make the concept of divisions of the square on the level of function. I divided a square into two main parts: a stable which refers to constant functions like transit and with a kind of static urban furniture, and a dynamic part – flexible, with movable items.

Thinking about the design project following our contemporary needs, for me, it’s also a crucial thing to avoid overload. I mean, to avoid a situation that people which look for a calm place to stay, will not want to go there or even more – not cross a square because of inconveniences. I think that this part is needed because of comfort and security i.e.: for an elderly or disabled people. We should remember that not all of us need a space which changes often. Even a small object put into a square could be danger for a blind person…

Then, in the second step, I described more precisely how I see the dynamic part. I realized that it can not be the whole area with movable furnishings because it would provoke a feeling of disorder…So I propose a ring (orange on the picture) with the extended activities from the buildings and the city with a place for flexible benches etc, and in the middle on the one side area with movable and flexible elements (i.e.: shelters, co-gardening etc.) and on the other side – the area without added elements (but with i.e.: artificial topography, playground on the pavement, place for dancing, gathering, acting, painting on the ground etc.). 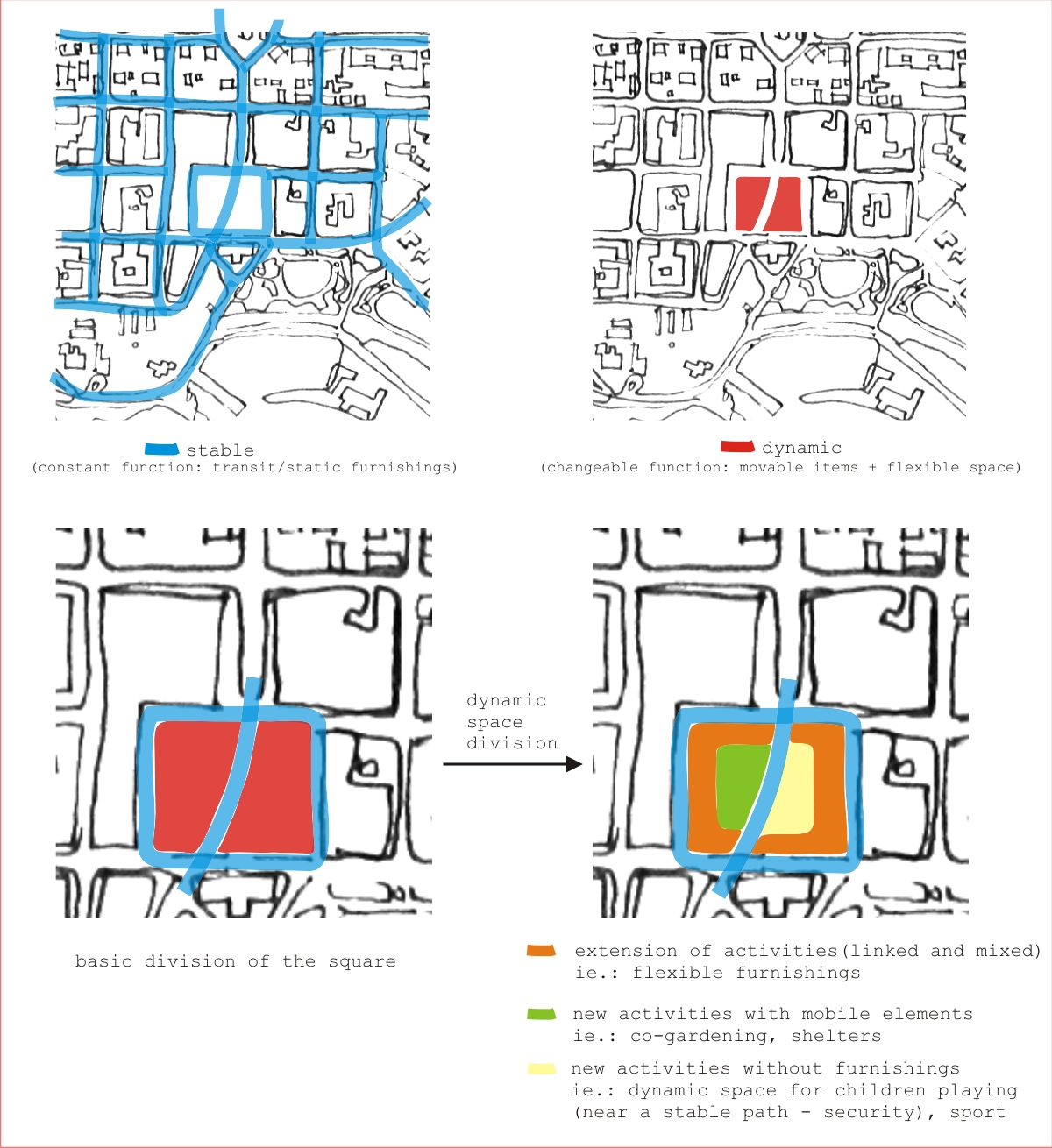 On the base of this division above, I drafted influences between the areas.

As a result I’d like to share with you the second card. The first external area on the picture is a list of all existing activities which take place on the Stortorget. Then, there are ‘possible extensions’ and ‘possible mixtures’ which are related to a ring area which I mentioned above. It is about the possibilities of linking the inside activities with outdoor space and show the possible interaction between them. The last one – internal area, is about ‘new activities’. As a ring will join the city with a square from the outside to inside, the central part of the square, I propose to leave for a new kind of activities which will have a start point on  new Stortorget and could radiate from inside to outside. Thinking also about a new usage of a bazaar building, I think that it could be a great place for a kind of operational center for those activities – the inside base. 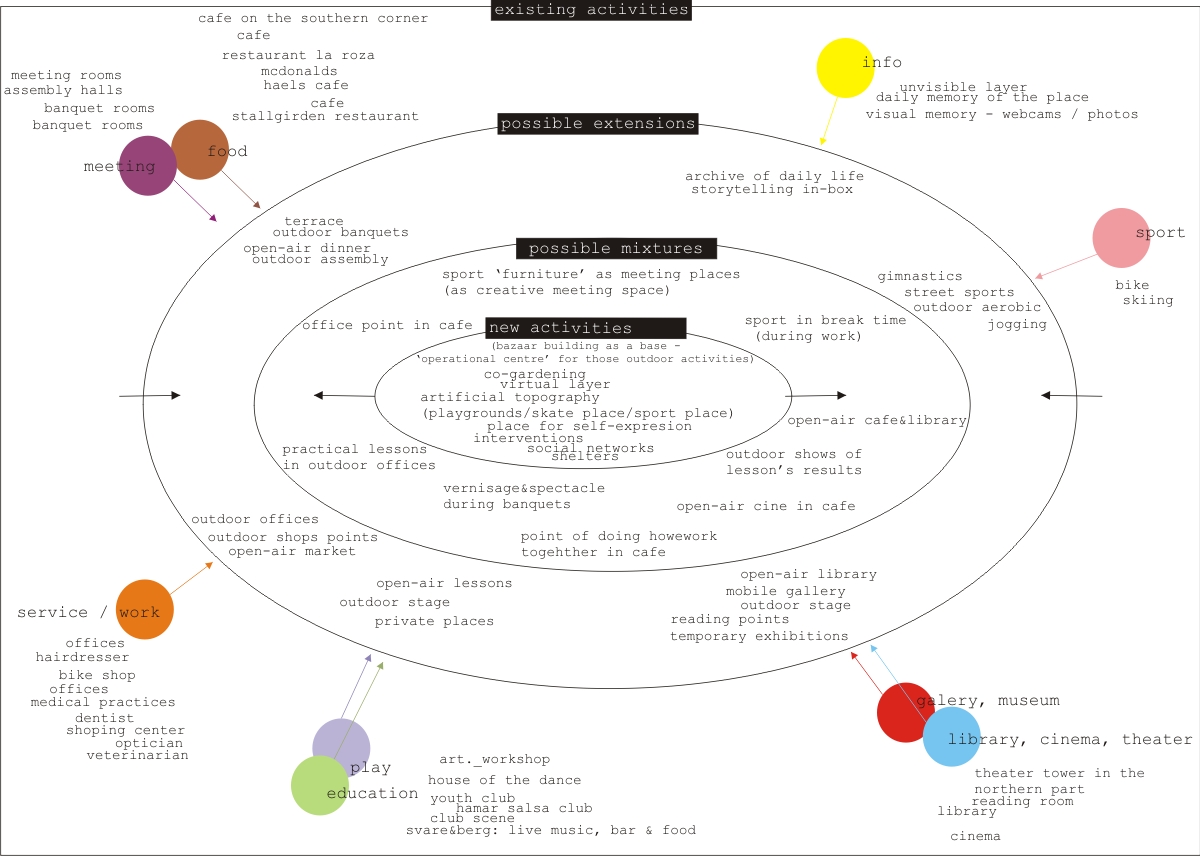