As you probably know, this week the online workshops begin but we will not talk about them yet, as first we would like to share with you last week first, since it was all about TECHNOLOGY, with two workshops and a lecture around this topic in the Physical LAB.

Bjarte Ytre-Arne was our community activator and the director of the first workshop. He is quite famous in hamar – he is the former head of the Department for Promotion at the Norwegian Film Institute, he´s been the CEO of Innovation Studios, Norway and headed the audiovisual media production company Fabelaktiv. 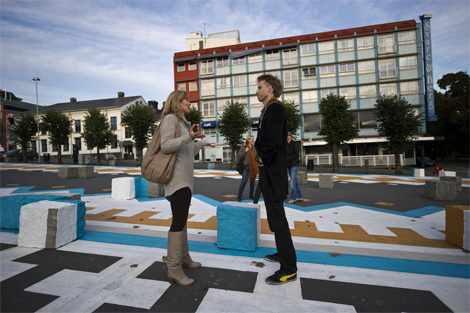 As you can see in this picture, the first task was to get the participants out on the square it self to get the ideas flowing.

It was a dedicated and creative group that had found its way to dreamhamar’s venue (Basarbyggningen, Storhamargata 2) this evening. The ideas varied, from lit mosaic tiles to an interactive Speakers Corner. Hans Brox advocated the idea of a huge tree, while Pierer Hulleman envisioned a digital skateboard track:

“We should build a digital arena for skateboards with transmitters on the boards and receivers in ground. That way it will be like a cours that keeps score. A analog video game if you will.” Pierer Hulleman

Since the evenings them evolved around technology, the participants where focused on how to combine the interactive and public space of the Internet with the physical interaction that characterizes a square or at a marked. Some even suggested a digital marketplace where farmers could display the goods. Another idea is the Interactive Speakers Corner: 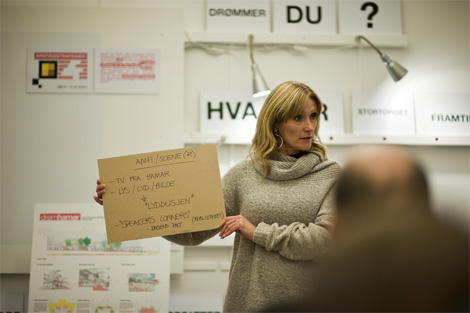 Others emphasised the social function of a square, such as concert arena or an out door cinema: