On polar bears and fountains | The Cultural Rucksack exhibition 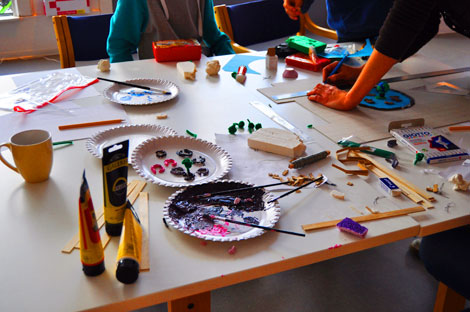 Tomorrow, Wednesday the 19th 0f October at 18h, the opening of the Cultural Rucksack exhibition will take place at the Kunstbanken in Hamar, curated by Katherine Berg.

The exhibition will show the work that 32 groups of students from 7th to 10th grade, have developed with four artists – Ansgar Ole Olsen, Kari Oline Øverseth, Esther Helén Slagsvold and Kathrine Berg. It will be on until the 31st of October, so hurry up!

After 4 weeks of intense work in dreamhamar’s Bazaar building, the Cultural Rucksack project has came to an end. It was a interesting sight to watch – pupils experimenting with notions of democracy and public space – coming up with ideas, sharing them with each other, and building them together in models. The results are spectacular – 32 models and texts expressing their wishes – from polar bears to tactile fountains. 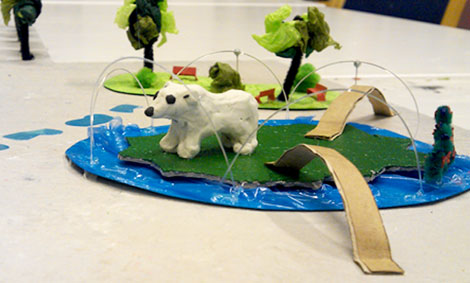 The Cultural Rucksack started as the individual work of 1292 pupils in 12 different schools in Hamar working with their teachers – Ajer, Børstad, Storhamar, Ingeberg, Ener, Prestrud, Rollsløkken, Lunden, Lovisenberg, Ridabu, Solvang and Greveløkka. After producing the A4 drawings the pupils worked in groups according to common topics, and each class chose up to 5 “class representatives”. Each of these groups spent a day in dreamhamar office working with the artists in further developing their ideas into models by questioning their wishes for the square. Each artist worked with his own methodology. 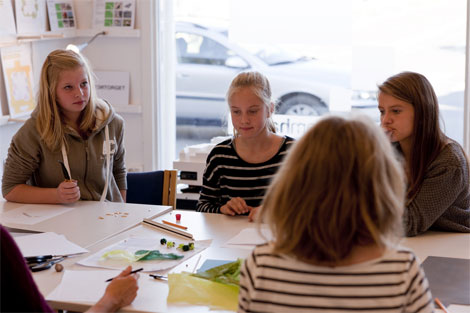 If you are curious about the results and other details, this page will be updated with the work of the students, their texts, interviews with the students, teachers and artists, and some other reports. Great for anybody interested in education and for the parents, too!

And because we are really in love with the idea of bringing art to school, we interviewed one of the artists, Kathrine Berg on Hamar Experience #12), and interview with Kathrine Berg, one of the four artists working with the pupils.