In this post I’m going to show the first results of the research about the tags Narrative/Storytelling and Community/Collaborative. Since the beginning, in fact, I noticed that the two tags are closely connected as storytelling have to do with cultural transmission and social learning so it has no meaning without a community.

The first project is a public space made in 2008 during the Mucho Mas Mayo Festival, in Cartagena. It was developed inside the workshop Multiarquitectura of the University of Alicante I attended as Erasmus student (led by Juan Antonio Sánchez Morales and Miguel Mesa del Castillo), with the aim to give to the suburbia of Virgen de la Caridad -with some problems of integration- a new place for socialization. The first step was to move the class there in order to come in contact with the community and to understand its identity: the result of this kind of analysis was a serie of maps of invisible aspects of the place (relationships, use of public space, public comfort, information flows, …). The second step was the production of intervention proposals in the form of models, that were exposed there for two weeks during which residents voted their favourite. The winning project (by David Andrés, Sara Fernández, Sara Jiménez y Laura Sempere), El Bosque Ilustrado, was then materially realized by all the workshop participants with the collaboration of the residents. It consists of a topography of red little hills made of concrete covered gravel and by a serie of artificial trees providing light, water nebulizer to refresh the space in summer days and shadow areas. It was really appreciated by the residents and especially by children, but over all it was an occasion for people to talk about their expectations about the neighbourhood, to know each other, to share their point of view, and to establish long-term realtionships in order to take care of the space they have contributed to build. So in this case study the main concept is not only the collaborative process, but also narrative as way to involve people in an architecture-tale made of chapters, like it is currently happening in Hamar. 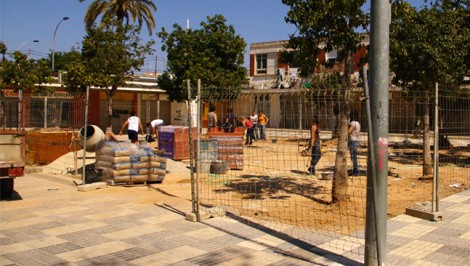 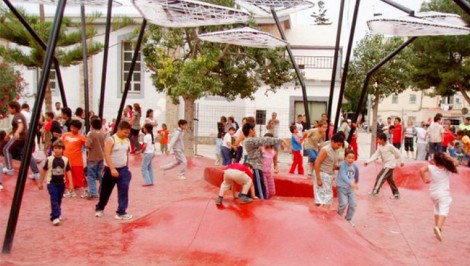 But what happens when the collective memory of a place is missing? It’s the case of the Candela Structures at the World’s Fair Marina in New York, as related in Urban Omnibus article.
These structures are fiberglass prefab shells, relics of the 1964/5 World’s Fair that curiously survive as so many of the buildings built for the Fair were demolished when it closed. Maybe at the time they were built people know them as public space with a precise identity that was forgotten as time moves on, although they are still appreciated and used. I think this is an important aspect to take in consideration, as Christian already did in his post Possibilities for proceeding the participation? when he considers the topic of Correspondence: “Even if a project have ambitions of realizing the highest degree of correspondence with the users and affected groups, their preferences, interests, needs etc are inevitable linked to a certain moment in time. After 1, 5 or 10 years the people will be different and their preferences, interest, needs etc will also probable be quite different.“As the author of the article says: “our city’s forgotten structures and spaces have stories to tell […] stories are what make a space into a place and connect all the disparate pieces of the metropolis.” So, for example, in the case of Stortorget square, the fact of giving a new function to the Bazar Building can be inscribed into this purpose, as a place where to preserve the “tale” of the place.

The third document I found -and I think it is the most interesting one- is a paper made by Sandra Viña and Tuuli Mattelmäki, titled Spicing up public journeys – Storytelling as a design strategy.
It is about the application of storytelling approach to the design of public space; in particular they report the case of the Otaniemi metro station in Helsinki. It is part of the expansion plan of Helsinki metro system, so the intention was to characterize the new station as an expression of the local spirit of the place (like in Paris, Berlin or London where all the metro stations are different and this help to create a mental map of the city). Hence they started to gathering stories about that place “The first reason for considering storytelling in design, as explained earlier, is to collect stories, i.e. insights, meanings, memories etc. from users that inspire and inform design. We applied several methods for gathering stories about the district of Otaniemi, and the metro service environment. We wanted to obtain authentic stories, anecdotes and viewpoints to the local identity, to services, and urban customer journeys. Utilising different methods and perspectives aimed at a diversity of personal and social experiences in relation to Otaniemi and the metro environment.”. And then they started to work with stories!They combine the stories gathered, summarize and re-write them in a non-linear and interactive narrative, and then the new stories were transformed into design and artistic language and some mockups, collages, illustrations were made. Currently I guess the project is still ongoing, but I can’t manage to find more information. Anyway, why don’t we identify some meaningful stories that reflect the identity of Hamar and Stortorget square?