Folly for a Flyover. Source

tac·ti·cal
adj: \tak-ti-kl\
1. of or relating to small-scale actions serving a larger purpose

who: you
what: change
where: the city
when: now
how: do it yourself*

The meaning of Tactical Urbanism is based on the idea of improving the livability of our cities. By using the street and public space as a laboratory for small, activist spatial practices, it is focused in a participatory approach of local people which aims to take back the street for its inhabitants and induce long term changes in towns and cities.

Recently, for the City Sessions: Four Questions on Tactics, Urbanism, and Practice, Mimi Zieger defined it as follows:

“Tactical urbanism uses the city as a site of experimentation, deploying pop-up parks, vacant retail reuse, or unsanctioned street furniture as way to reprogram the urban realm. The practice traditionally takes an activist position in relationship to environmental, political, cultural and economic factors. However, as the practice is increasingly being absorbed into mainstream thinking on cities, it is critical that we look closely at both the underlying assumptions and resulting effects.”

In general terms, urban planners focus their work in designing large-scale interventions in order to achieve qualitative changes in the urban environment. In recent years, accompanied by a sharp fall in public investment and financial environment unfriendly to this type of project, we have seen a new interest in citizen initiatives on a smaller scale and is this what is now called Tactical Urbanism. 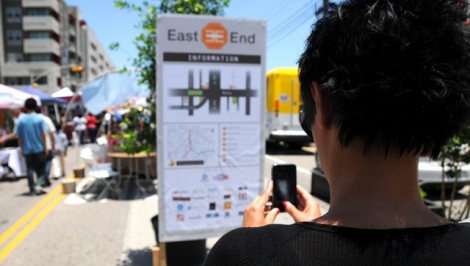 As Chris Johnson says [quoting Jeb Brugmann], the emerging urban planning is essential for the survival of cities. When asked what if the new digital media are leading us towards a new paradigm of urban development, Dan Hill answered with a resounding “yes.” According to Hill, with the interaction and the use of digital technologies and citizen participation, we can focus on concepts such as transparency, open processes and open access to information. All aimed towards a more human understanding of the city.

If cities are constantly in tension, and inherently unbalanced systems, as Hill wrote, we can add that small urban intervention are the guidelines to restructure the city and to make us think critically about the differences between “guerrilla urbanism”, “DIY”, “spatial practices” among many others, to deeply understand the way our cities evolve and react appropriately in order to catalyzing long term change with short term action.

——
* Ruth Keffer on DIY Urbanism. Quoted by Mimi Zieger on The Interventionist’s Toolkit