What is network design methodology?

Network design is something everybody will be talking about very soon. Or at least they should. The project dreamhamar is based on network design and we want you to fully understand the concept. So, here is an article Francesco Cingolani wrote, originally in Spanish for La Ciudad Viva, where he describes the basics of network design in relation to today’s culture, and wonders about how it could change more than architecture.

The article begins by explaining a networked-learning project carried out at Ecosistema Urbano, called Urban Social Design Experience, and explains how this project allowed to define this new methodology for design.

Please keep on reading. When you have finished, we are sure you will find network design just as fascinating as we do.

“Learning is not a product of schooling but the lifelong attempt to acquire it.” – Albert Einstein

For several months we have been developing in Ecosistema Urbano a project focused on expanded education. These last few weeks, we gave it a close look and we would like to share our thougths with you.

The project in question is Urban Social Design Experience (USDE) and we presented the first session – which ended recently – as a series of online courses (experiences). During these experiences innovative approaches and lines of work in urban culture and urban management were presented.

We were on a meeting, when we realized that the word “course” fell short for what we were doing. The truth is, we were developing a networked learning platform.

Next meeting we encountered another definition problem – networked learning was too narrow to drescribe the USDE project. We were not talking just about learning, but also about a network for professionals to work togheter. It was clear then that USDE should be understood as a professional and educational networking project.

Later on (again in a meeting) we reached another conclusion. What if USDE could also be understood as a platform for network design, a place where the creative process is distributed instead of centralized in a single person or firm? That is how we started to think about network design as a contemporary evolution of citizen participation. 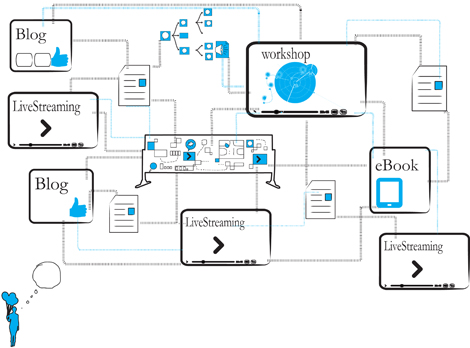 After much discussion and consideration attempting to accurately define network design, we all agreed that it is also a new workplace. Designing within a network basically means building networks, and even thinking in, and with, the network (network thinking). 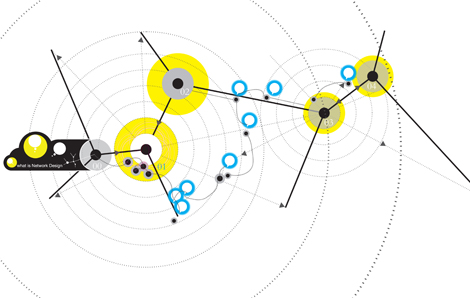 This process may seem messy and complicated – who knows what we might come up with on our next meeting! – but is not lacking in coherence since one of the basic premises is that if new techonologies provide tools and easy access to information, then what we need are the right connections to access that information, in other words, a good network. This means that how we design our networks is fundamental for our designing, working, and learning activities.

Feeling dizzy? That’s good because it will bring you up to the next question: In a world where the connections between the nodes providing access to the information are more important than the nodes themselves – the content -, who will continue producing information? Who will feed updated information to the nodes? Who will undertake the progress of knowledge? Baricco explains that trying to produce knowledge – content -in the traditional way makes no sense anymore since in that system everything happens on the surface.

Then, “If we all spend our time writing on our blogs, who will have time to read them?”. That is what I asked myself a while ago, when I started my own blog.

The whole idea of a world of contentless connections makes people nervous. It also puts in question the efficiency and value of today’s cultural system.

We would like you, the reader, to help us answer these questions. We believe they contain a fundamental key to understanding today’s culture. Just take a look at the general concern on the future of education and the debate surrounding culture and innovation. Coincidence? We don’t think so.

According to Wikipedia, education is the process by which society deliberately transmits its accumulated knowledge, skills, and values from one generation to another. This has obviously changed since the technological revolution. The way we access information today has radically change, and therefore, the education system is in crisis. Education can no longer be understood as a vertical flow of knowledge – from teacher to student. The model of temporary order and separation – from ignorance to wisdom – implies a structural contradiction with the simultaneous character of nowadays information system (learning by doing).

Baricco suggests that “Barbarians” do not care about content but only about experience, movement, vectors, and the transmission of the information. One possible answer for the abovementioned questions is that knowledge is no longer produced at the nodes but at the relations they establish among themselves. Maybe we need to leave behind the traditional separation between contents and their connections if we want a sustainable model of information production and information exchange. We need to see content and connections as two different parts of the same process: to copy is to create.

In Ecosistema Urbano we believe that knowledge and learning are becoming an hybrid and diffused phonomenon which is transforming traditional closed and fixed structures into open and extremely flexible networked structures. If knowledge consists in creating connections and exchanging information efficiently – instead of an slow, organized and vertical transmission of it – then society, culture, and urban and architectonic design are getting closer to the network model. This model is revealing itself as more suitable and efficient, particularly when it comes to innovation.

This trend towards network creation, high connectivity and complex dynamics is nothing else but an intrinsic feature of today’s world. It also creates a new research and work field that we have named network thinking. For us, network thinking consists in applying thinking within a net to the design of processes, strategies and urban projects.

_
This article, titled “Network Thinking : An Emergent Design and Learning Methodology” was originally posted, in Spanish, in La Ciudad Viva