Story 5: Stortorget, the agora of Hamar 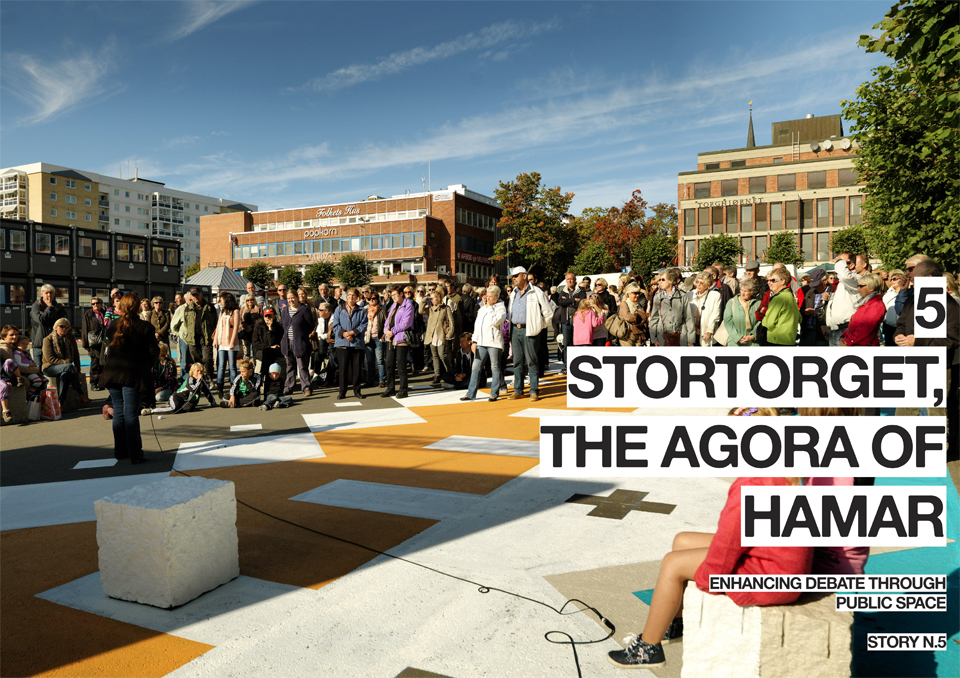 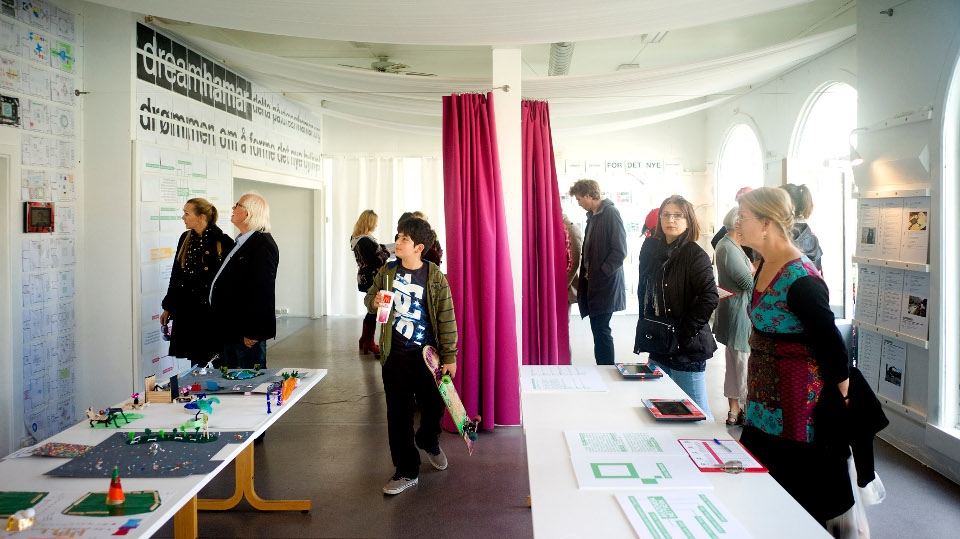 One of the biggest challenges for Dreamhamar – beyond coordinating the large number of networks involved – was enhancing local participation. I remember talking with some Norwegian architects before we launched the project; they were always very excited about the project, but less confident about the challenge of moving people out of their ‘natural environment’ to participate. “Norwegians are not easy to move,” one said. Pretty quickly we understood the scope of the challenge. Before coming to Hamar, we sent more than one hundred emails to local associations as we wanted to meet them and discuss the project – but there were few responses. We discovered the importance of meeting stakeholders personally. Coming from abroad, we had to build up confidence among the locals. As the process began we had several meetings with the municipality’s communication department, to go over our communication strategy and discuss the issue of how to get people’s attention. “The newspaper,” said Ingse Kjernmoen, “whatever you plan and do, make sure the newspaper is talking about it and you will reach the people.” 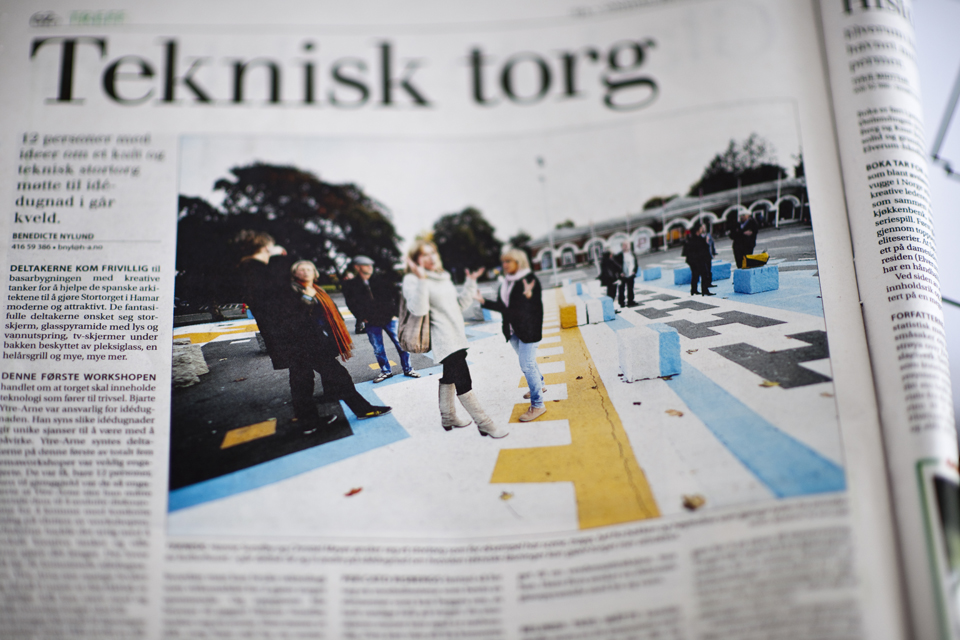 So we got in touch with Hamar Arbeiderblad, the local daily newspaper. The most logical starting place was the Culture section, and we had a few feature articles published about our project in Hamar and how we were looking forward to meet with people. But getting in touch only with the Culture section was not enough, it almost didn’t do anything to engage the local residents. Also, Dreamhamar suffered from its undefined status, since it could not be classified into any obvious category like “art project,” “commercial event” or “entertainment.” Even people who were familiar with participation processes found Dreamhamar very complex, as it contained a wide range of networks and experts, and more diverse activities than just workshops. The fact that the project was shortened from one and a half years to four months at the request of the city council executive board, made it even more challenging to communicate the different events and workshops in a distinctive way through the available channels. Throughout the process we have tested various means of communication such as the local newspapers, radio, printed advertisements, posters, local agendas and our constantly updated web page, dreamhamar.org. Since the web page was designed mainly to communicate English content (with a Norwegian section), it worked well as a platform for discussions among the global online participants, and as a window to the world about what was going on in Hamar. However, we gained little web activity from the locals at first.

As part of the original project strategy, we wanted to hire a person who would direct the on-site workshops and would help us map the local community when we arrived in Hamar, but after a short time we made a little change of plan. Instead of one person, we decided to engage five different community activators, one for each of the five topics that would be featured in the on-site workshops. They were savvy about the specific topic and knew the local community members. In fact, one of their responsibilities was to spread the word about the project and ensure participation in their activities. Like ambassadors, they represented Dreamhamar. One of the things we found out during the participation process was that more people participated in the workshops when we had an active, local community activator. 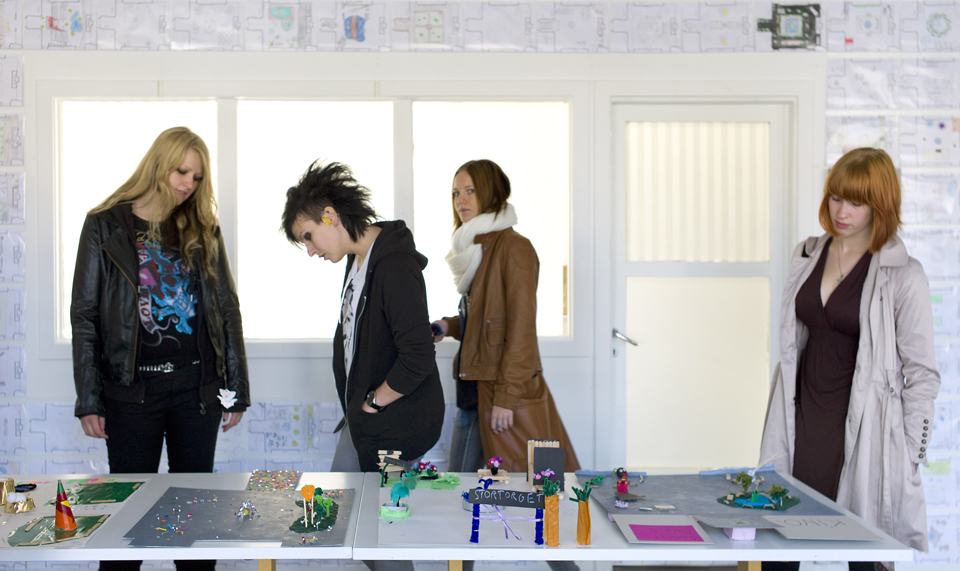 Painthamar, the opening event, was planned to launch Dreamhamar and introduce it to the maximum number of stakeholders. To celebrate this new beginning for Stortorget, the parking lot was closed for traffic by simply moving and changing the use of the existing granite bollards – from parking lot boundary markers to benches and tables for this temporary public space. It was a simple, but impressive, transformation. We also invited Boa Mistura, an urban art collective from Madrid, to re-interpret the temporary public space. It took 52 hours of work, 120 liters of paints and 10 hands, to transform the space into a cheerful, colorful stage for creativity and innovation. 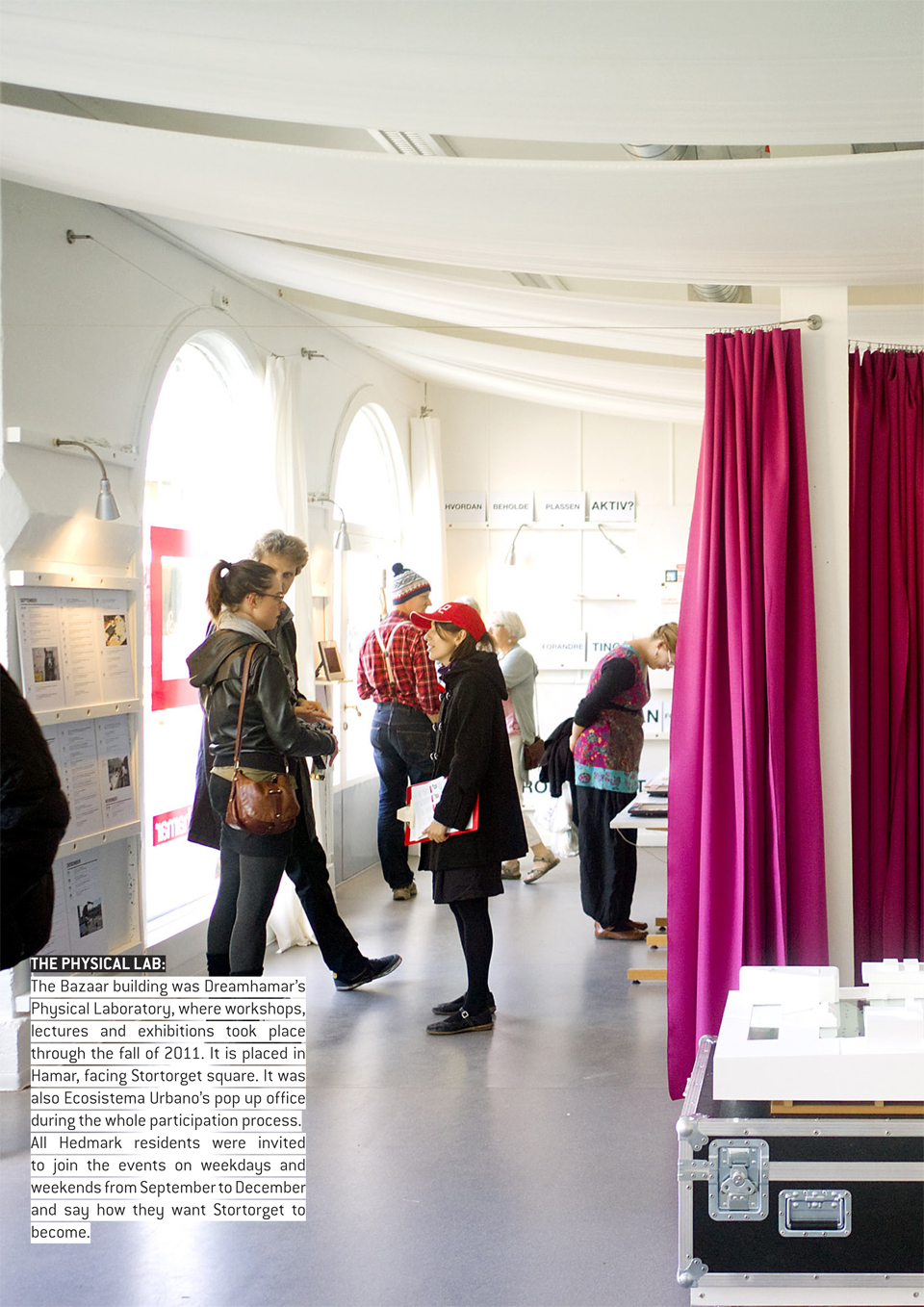 “In the future, the question will be: Where were you when Stortorget was redesigned?”
Einar Busterud,
(former) mayor of Hamar

During the opening event, two important and revelatory things happened.

First was the speech by the (former) mayor Einar Busterud:
“Today we are building the foundation of what the citizens, in a 100 years from now, are going to feel about our main square. In the future, the question will be: Where were you when Stortorget was redesigned? Then you will have two possible answers: Either you can tell us about your participation, or you can explain why you weren’t there. If you are not participating, don’t complain afterwards. The only certain thing is that the square has to change. So please, come join us for this process. Stand up and be a responsible citizen!”

When we think about it now, this was an invitation to participate in the process, but also added an important political layer to Dreamhamar.

Shortly after, a local artist named Knut Bakke demonstrated because the municipality was not providing a museum for local art in Hamar. He therefore decided to burn a piece of art in the centre of the square, as an act of protest. 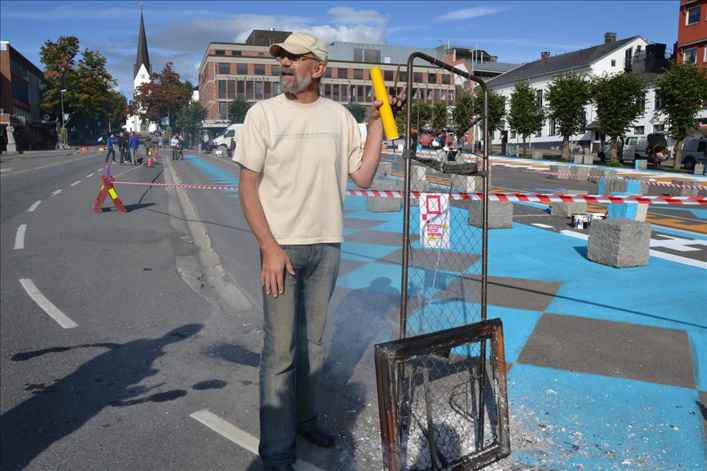 Stortorget was officially reestablished as a public and political space – the agora of Hamar – where discussion and confrontation for the sake of the public interest could take place.

As stated before, getting people to participate was the challenge. After the opening event, we had more than 60 people registered for the upcoming workshops. It was a good result we thought, but later it turned out to be a challenge to get people to show up. During the first week of workshops there were very few participants.

Nonetheless, the Physical Lab was visited regularly by the locals. The physical location – in the heart of the city, in front of the main square – along with the inviting nature of the building made it easy for people to come by and see us. Sometimes it felt like the Physical Lab was a meeting point, as people were constantly stopping by to discuss their agendas, whether they related to the square, problems in Hamar, or even just their personal wishes and thoughts.

This was also part of the ambiguous nature of Dreamhamar. We were hired by the municipality, and therefore we were often perceived as the kommune; we were Spanish, and therefore we were outsiders; and we were placed in the centre of town, in a mythical building, and therefore we were open for all sorts of visits, comments and discussions. This gave Dreamhamar the extra challenge of absorbing even more than the ideas and opinions that arose during the workshops. And it allowed us to watch and be watched. “Watching” the local community allowed us to learn a lot about it, and “being watched” by it also gave us a unique understanding of our role in the community.

On provocation and communication

“You need to provoke!” said Geir Cock while we were talking about how to get people to participate.

The purpose of Dreamhamar was not only about arranging on-site workshops where dedicated inhabitants could discuss and write down their suggestions and preferences for the new Stortorget. It was also about engaging the people that would normally not approach these kinds of discussions, making them think about public space in general – and especially Stortorget. So as Dreamhamar progressed, urban actions also became a more important tool to empower the local population. With help from the National School of Gardeners and Flower Decorators (VEA), which is located in the region, two installations were made and remained on the square until the 5th of December. An old car wreck was filled up with plants both inside and outside and transformed into an untraditional flowerpot, and a huge circle was made of 400 meters of tree trunks cut in pieces, creating a playful and colorful landscape. The children seemed to enjoy it from the first second, while others did not see the point in adding a new layer to the square.

These two installations made the inhabitants of Hamar look at Stortorget with new eyes, not only as an indifferent, left-over-space covered with asphalt, but as an exposed public space that one should handle with respect.

With the help of the editor in chief for the Hamar Arbeiderblad, we met with the editor of the Debate section, Anne Ekornholmen, a journalist who wanted to help us in communicating the project to the citizens. They suggested that we use the Debate section to publish articles and content to communicate what Dreamhamar was about. They also suggested that we schedule an online debate where people could ask questions “live” about the project. We were very keen on these opportunities.

During the last weeks of the participation process, the local newspapers told stories about concerned shop owners around Stortorget losing their parking lot temporarily. That made us curious: are surface parking lots what the city center needs in order to compete with the suburban shopping malls?

It is a fact that nowadays the role of the city center is more of an arena to socialize and for leisure activities than it is about business. So the challenge is to keep the city center attractive and alive the whole year around and to convince the shop owners that they would benefit from this in the long-term. Non-commercial events such as Greenhamar and Playhamar could provide the city with an important additional aspect that makes the inhabitants connect more closely to it and use it more frequently. As a meeting place, the city confronts a real challenge in the face of shopping malls that can always offer temperate, calm and dry conditions regardless of the season (in addition to free parking).

Politics is fundamentally about engaging people while accommodating their viewpoints, usually towards a goal or end. Within the ‘conventional’ architectural process, politics becomes part of the dialogue between the architect and the client, both of whom may have different opinions at different stages of the process; the final design reconciles these opinions.

Ultimately, in a participation process such as Dreamhamar where both local and global stakeholders are engaged to participate, the project’s success becomes a complex political challenge. The precise goal was to gather together a collection of opinions, viewpoints and projects that are all important for the understanding of the community around it. These ideas must be taken into account, and the final product – the design of Stortorget – should be adjusted to reflect these mandates and values.

Dreamhamar had an ambitious agenda that placed it in a rather indistinct position: between art, architecture and communication project, and between the public sector (the municipality selected us as the competition winners), the private sector (with whom we collaborated for the events´ organization) and the community itself (everybody is invited to participate and contribute their ideas). 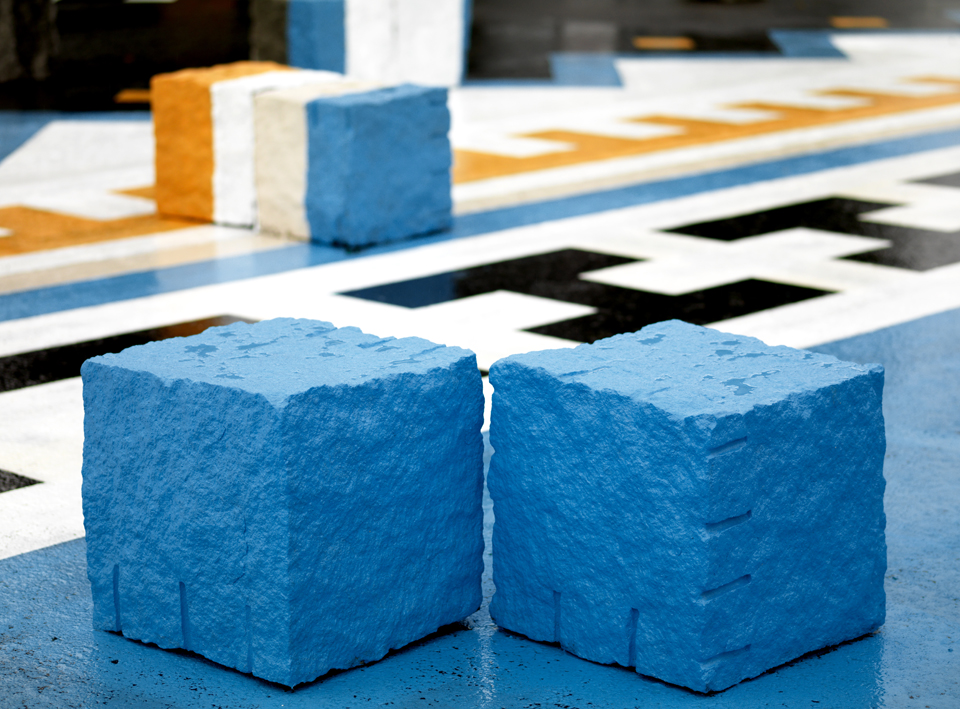