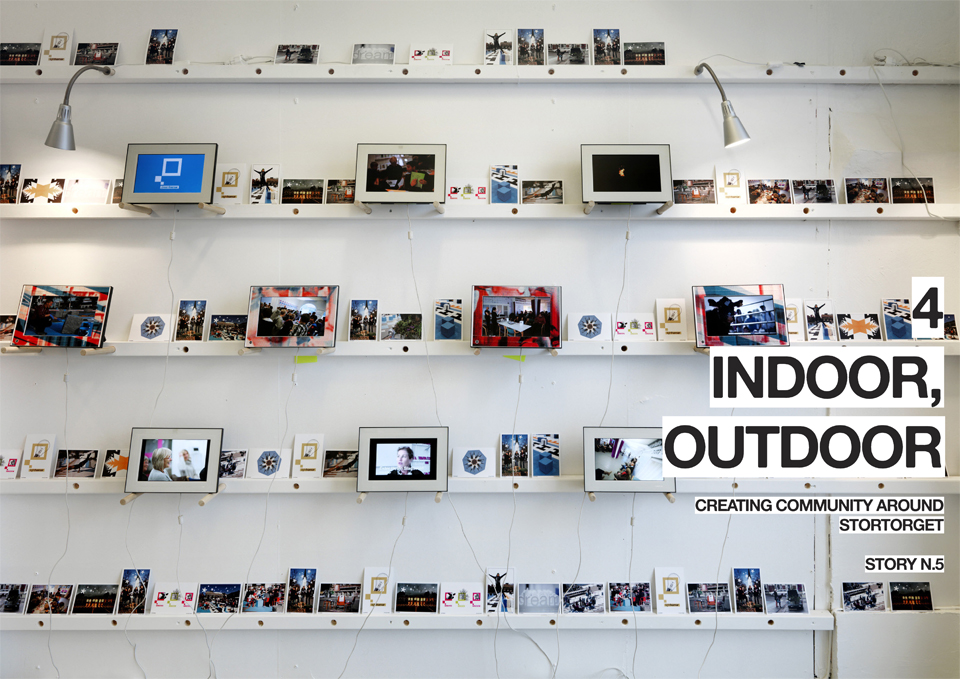 “By the way, we are putting RFID* tags on all the books as we speak. It is part of our moving actions.”
– Berit Borgen, library manager

Books on the go
Let’s take books for a walk!

Hamar Library watched over Stortorget for more than 20 years. From afar it looked like a building made out of paper, simple in form and construction. When we arrived in Hamar the building was about to be demolished. On its foundation, the new Culture House was going to be constructed. Almost everyone in Hamar had an opinion about this project – about its cost, how it would affect the future of the city, what activities were planned to happen, etc. Then Dreamhamar came into the picture, shaking things up even more.

By the time of our arrival in Hamar we had learned a lot about the coming cultural center and were just beginning to understand what the new square would be like; but what about the future relation between these two?

Just two days before it’s demolition, we met with the library manager – Berit Borgen – for a video interview. That same day we collected chairs and tables that were previously used in the library and were now going to be trashed.  It was an inspired re-use action for the new pop-up Physical Lab. Berit was preoccupied with the moving and packing – they were basically boxing thousands of books and shelves. The place was naked.

It was surprising to find what used to be the main reading space.  The space was quite majestic, with central stairs, a hall and open spaces around it. It felt spacious and cramped at the same time. Berit sat on a couch that now looked like it was completely out of place, and she was asked the usual questions about Hamar and what she thought about Stortorget,  what the future library would be like, and how it could be connected to the new square we were designing.  Then the conversation shifted to technology in the world of printed books and libraries. “By the way,” she said, “we are putting RFID tags on all the books as we speak. It is part of our moving actions.”

RFID (Radio-frequency identification) is a technology that uses radio waves to transfer data from an electronic tag, called an RFID tag or label, attached to an object, through a reader for the purpose of identifying and tracking the object. That would make it easier for making books available outside the physical space of the library, and for tracking them between the interior and exterior space. If RFID becomes an open web-based platform, and users can tag, share, and contribute content to the digital existence of their own places and objects, we can truly speak of an Internet of Things. This opens up opportunities for new sustainability scenarios, for new relations between people and the stuff they own, and for other locative applications. The end of the “old” library is the beginning of the implementation of new innovative ideas.

A few weeks later we held the first on-site workshop in the Physical Lab, under the theme “Technology”. For the occasion we had invited Juan Freire – an expert on the role of innovation, technology and digital culture in social networks and cities – to lead a workshop and give a lecture. It was an opportunity to apply his knowledge and analysis to the Hamar case, by organizing a meeting between him, the future residents of the Culture House and the ecosistema urbano team. The idea was to use his knowledge in applied technology to implement future solutions, such as the RFID, for the better use of public space. 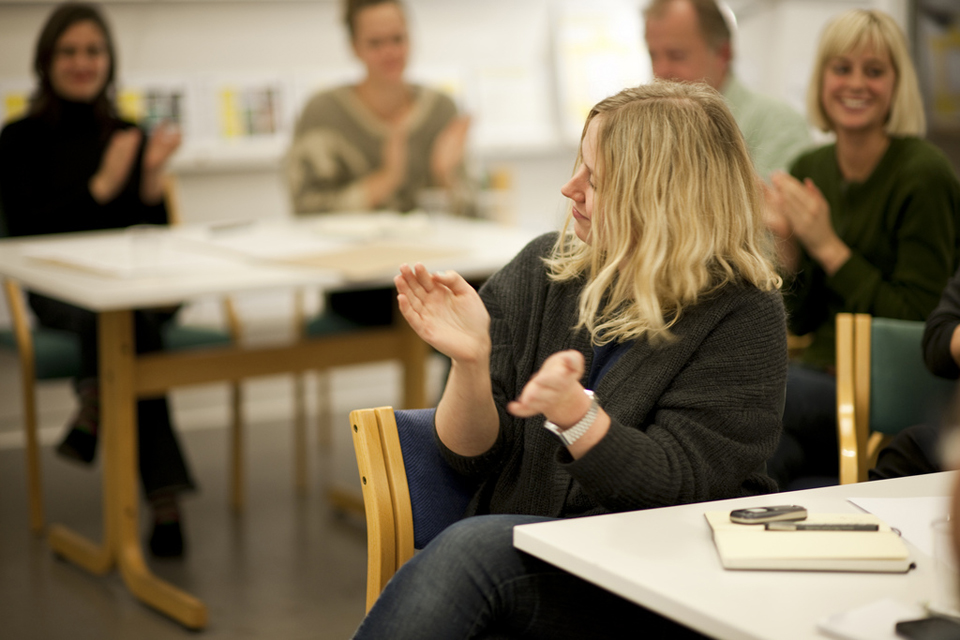 The meeting took place in the Physical Lab with Terje Halvorsen (Cultural Department Manager), Berit Andersen (Cultural Department Advisor), Berit Borgen (Library Manager) and Hanne Sine Andresen. One of the challenges that was mentioned by the Berit Borgen was how technology could be used to promote reading and the library. The new Culture House is going to have a 3000 square meter library. It is going to be a mixed-use environment holding after-school cultural activities, a concert hall, theatre, and cinema. The estimation is that approximately 800 000 people will frequent the center each year (currently, 200 000 people are visiting the library). Within the new Culture House the library is the most open and democratic space, as it does not ask for entry fees and is more inviting for community actions.

One of the observations made during the meeting was that both the Culture House and Stortorget are facing a similar challenge: how to attract users. How can we create a community around both indoor and outdoor spaces as meeting places? It is important also to develop a strategy and communicate to the people that the digital and physical spaces are working together – Culture House, Stortorget and the website – so that they can participate. Dreamhamar is building a network around the square, engaging communities to work together. As the participation phase finishes, there will be a rich database of people that will hopefully want to continue participating in the development of their future community. 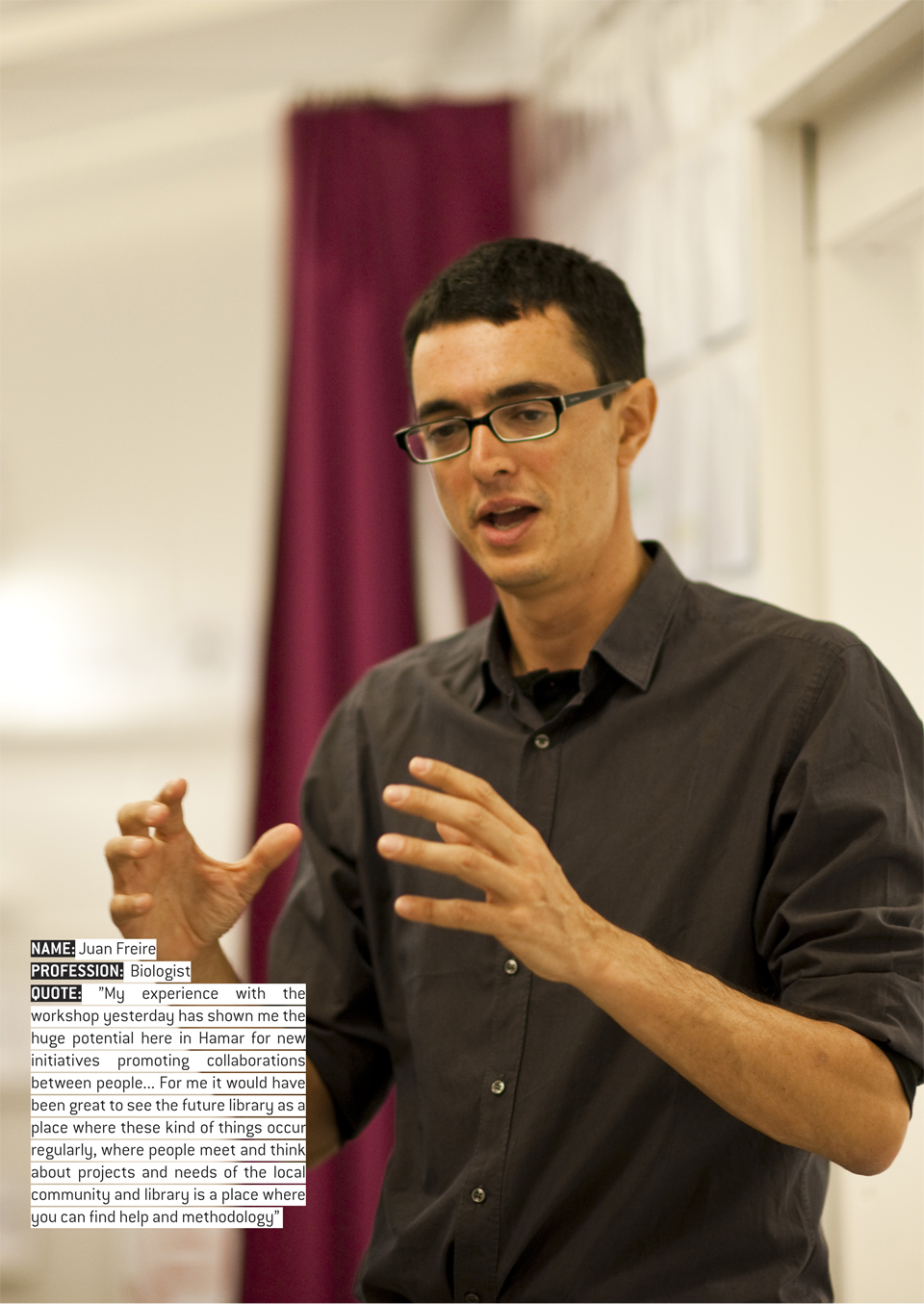 “Since the library building was removed, we moved to a temporary space underground, so we are literally invisible. We are thinking of ways to attract attention, creating a project where we are asking people to take part in producing text for the web,” said Berit Borgen. Juan Freire gave the example of Localpedia – a wikipedia of topics related to local interests. It is a tool that uses the knowledge of citizens to document the local culture and to involve people from the community, which can connect elders with youngsters in an intergenerational and cross-cultural collaboration.

This kind of action proves the importance of interaction between the Culture House and the future Stortorget as they will be born, grow and coexist together in the heart of Hamar. 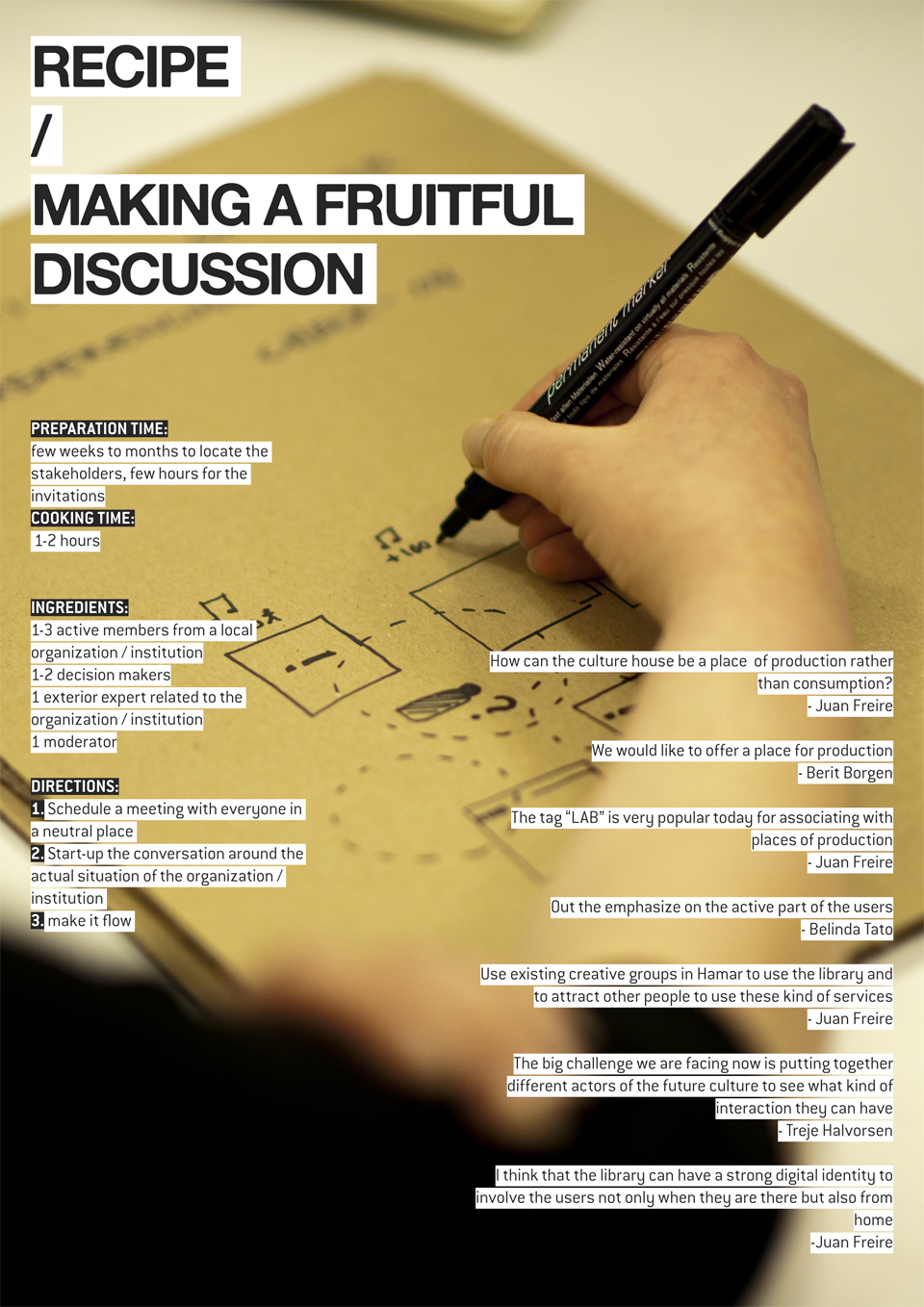 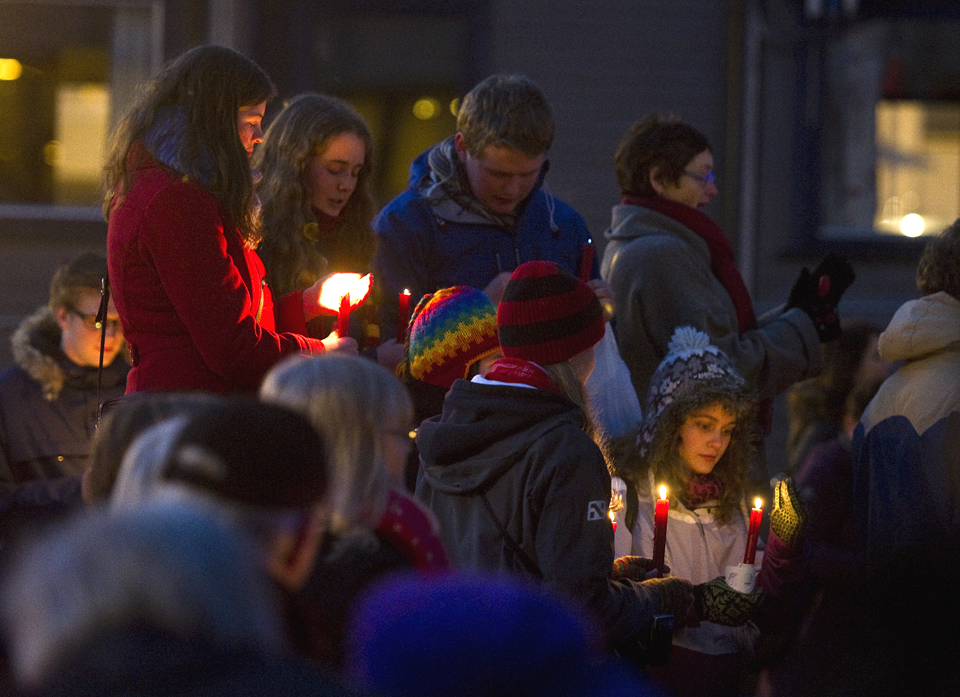 During an interview with Thomas Caplin and Tori Årva they expressed the need for practicing in public space; Tori is a flutist working at the Hamar music school, Thomas is a choir conductor working with Hedmark University College and the young choir.  Both of them mentioned that each institution is essentially working on its own, and that there is a beautiful opportunity through the future Culture House to establish a real collaboration. We asked them about the outdoor public space and what it can represent for music. It sparked a discussion, and at the end of it Thomas had an idea: “Let’s organize the first flash mob in Hamar! We can make it for Christmas, as a surprise during an outdoor event on Stortorget. We can sing Hallelujah!” We thought it was an exciting initiative, especially coming from a local organization. It also uncovered the utility of the outdoor public space as an open place for spontaneous activities, free of charge.

The first rehearsal was a moving sight: around 70 students standing in a circle, from tenor to bass, first warming up by doing strange voices while they practiced Hallelujah. Then we met the other choirs who were practicing in parallel for the same event, Lighthamar, a light installation project which was the wrapping up event marking the end of our stay in Hamar. 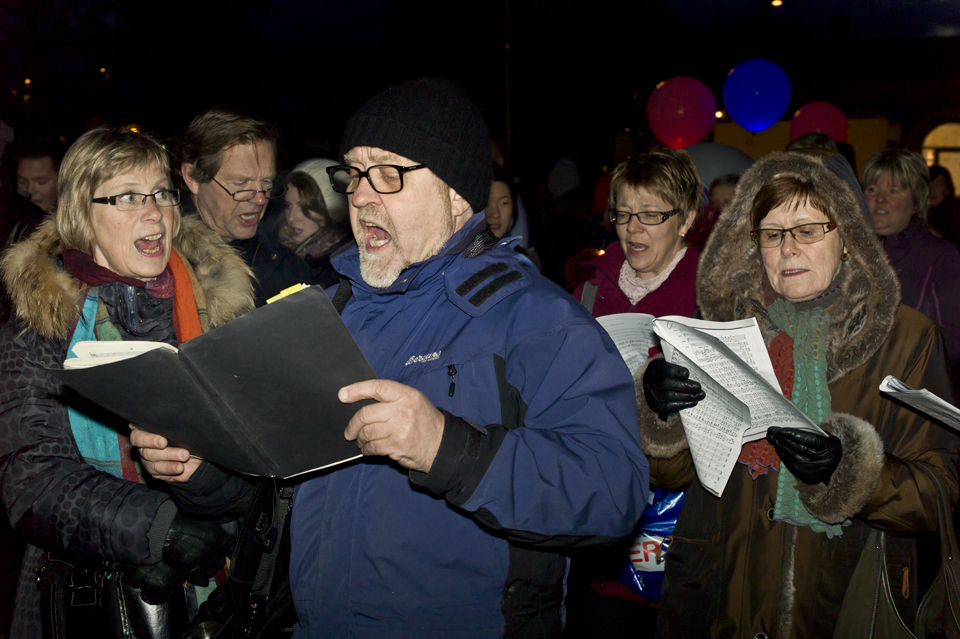 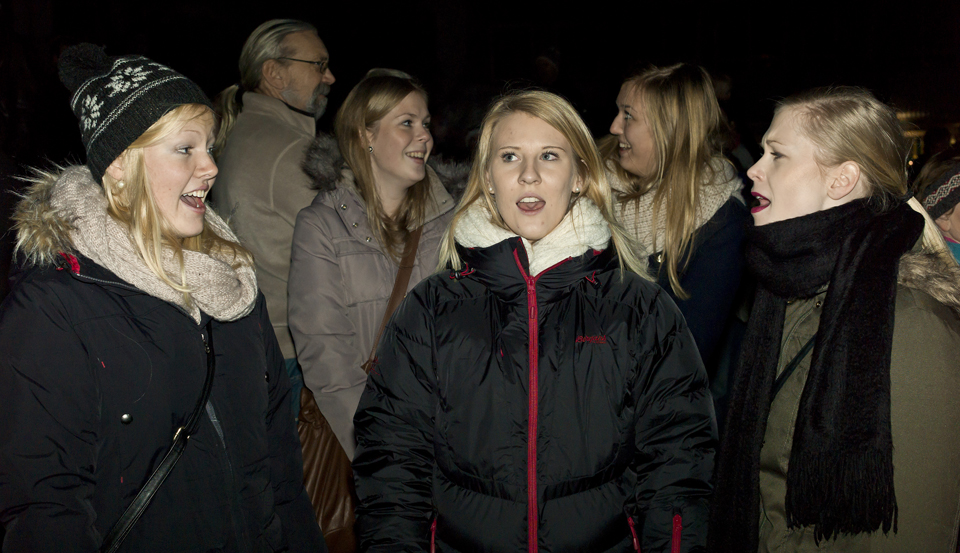 December arrived (but not the snow!).  It was almost three months after the meeting with Tori and Thomas and Lighthamar was happening in Stortorget.  The event was invaded by 250 singers, professionals and amateurs, from Solheimkoret, Toneheim and the Cathedral Choir. 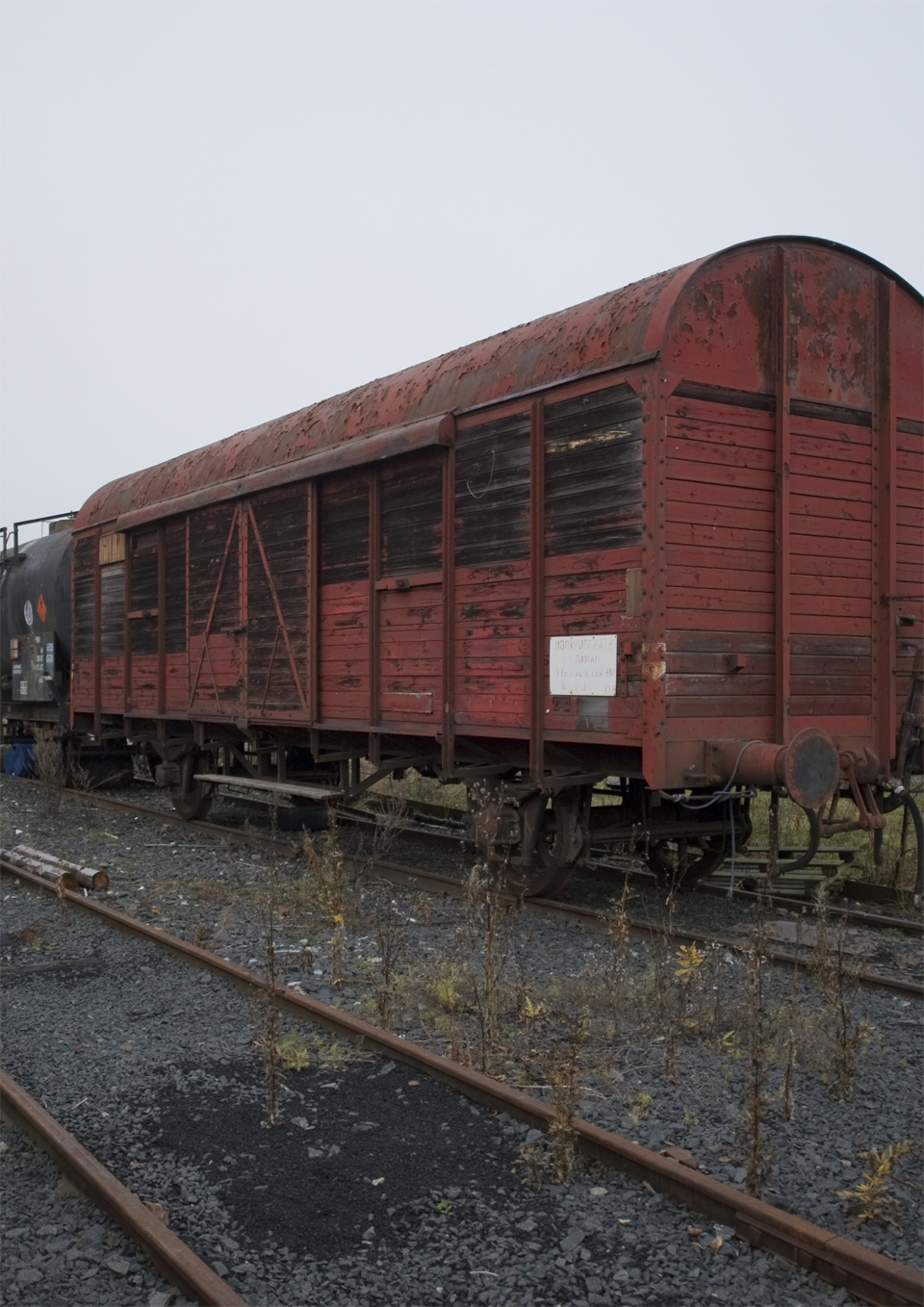 “We have long dreamed of a ‘street chapel’ in the city”
Øyvind Fjellestad,
pastor of Hamar Frikirke

but what about the wagon?

Once upon a time, Hamar was an industrial site. It left indelible marks on the town’s plan: abandoned factories and warehouses, brownfield land and the main train line cutting through the town from the lakeshore. The factories are now slowly being converted and taking on new functions; the brownfield land will be converted for housing along the shore. That gave us the inspiration to propose an intervention: using one of the abandoned train wagons in the brownfield land to temporarily host different activities in the square. The first idea we had in mind was to use it as a library pavilion – promoting reading and offering a place to meet and interact.

Like the square, a library represents a space where one can stay for free, without former planning. In that way, its resembles outdoor public spaces, and would work well as a program for the wagon. Unfortunately, we met many logistical and technical challenges while planning to transform the wagon into a library branch. Books require a dry, temperature controlled atmosphere, and we were also looking for a more ephemeral use of the wagon to ensure a diversity of uses for the space. We decided to use the wagon more as a temporary shelter and service device for pop-up events while the new Stortorget is waiting to be constructed, to enable a continuity of activities in the main square.

As time went by, we managed to reach more and more members of the local community who were seeking a place to practice their activities, to exchange and interact.
We are now collaborating with the kommune to develop a program that combines the existing activities in Hamar, and to promote Stortorget as a new scenario for them to happen.

The future design of Stortorget is influenced by many interconnected factors. During the on-site workshops, and in conversations about the topic with locals, a question keeps being repeated: “What would be the correlation between the Culture House and the square?”

It is quite clear that the connection between Stortorget and the new Culture House is strong. The different people engaged in both projects should work cooperatively to make the most of  this interrelationship.

If this cooperation is well-defined, Stortorget will complement the Culture House program by absorbing, giving visibility, and expanding it.