Story 3: On stools and people 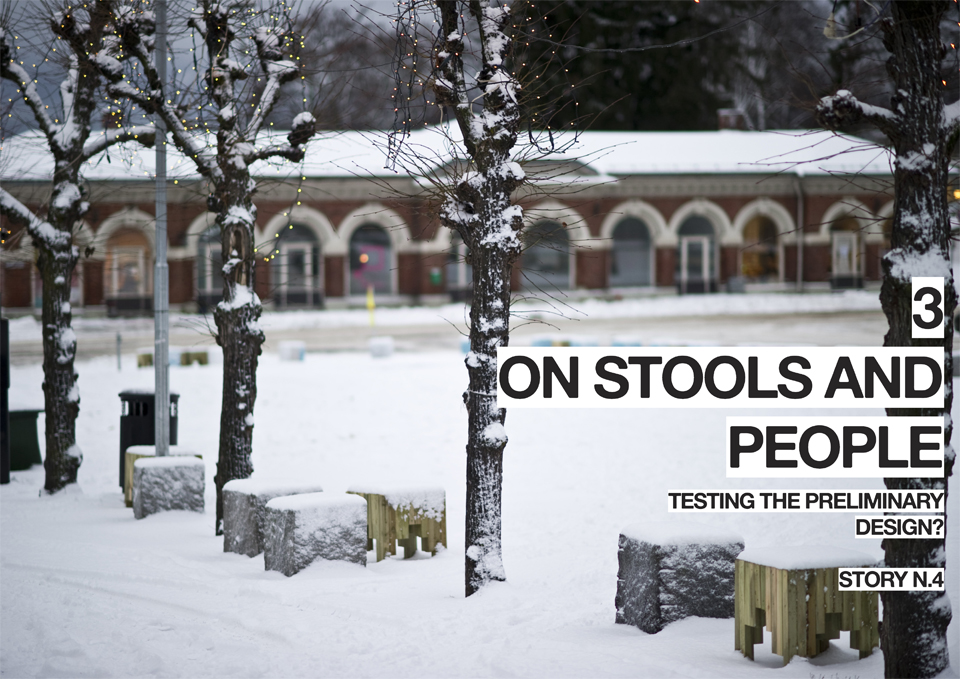 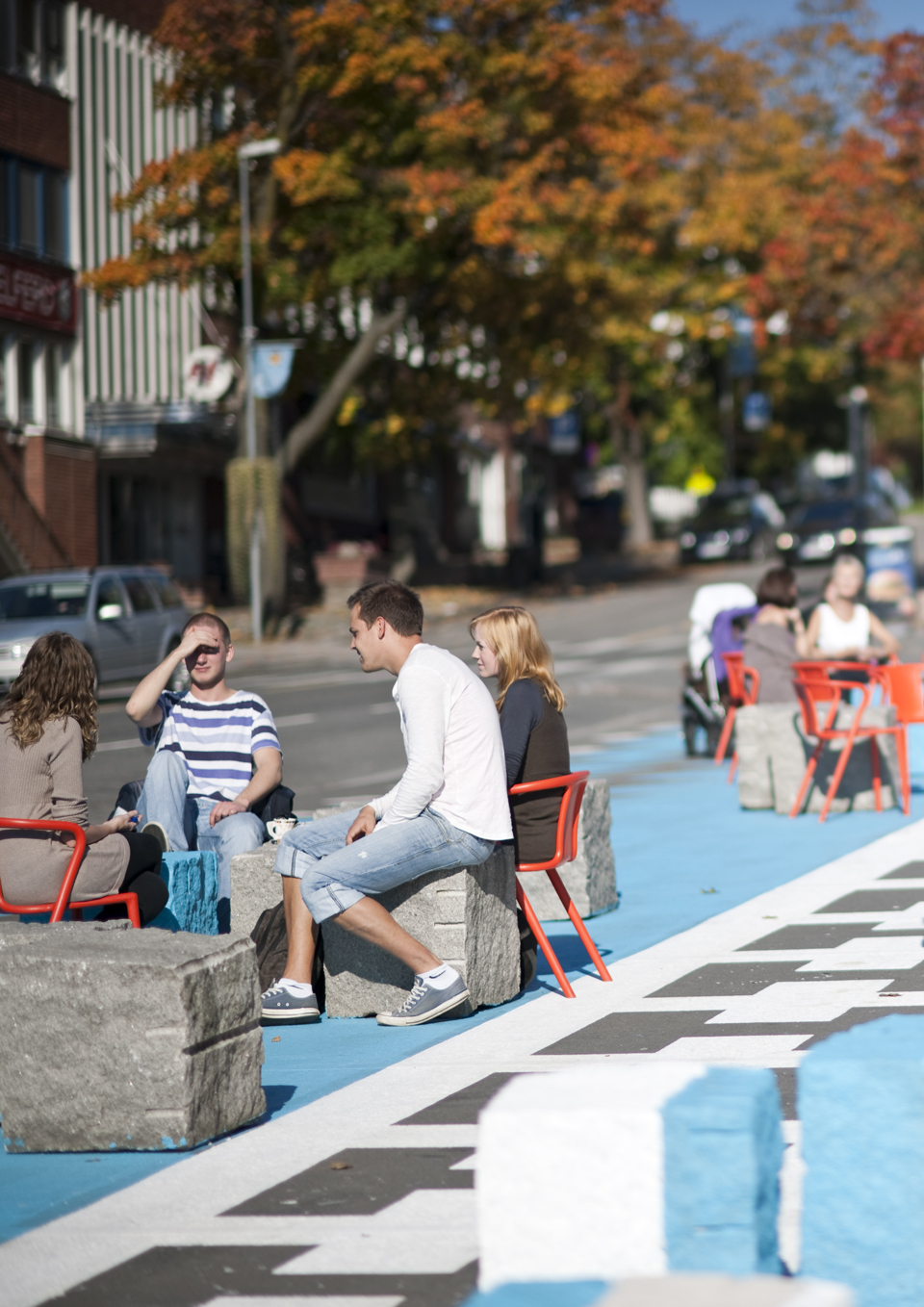 Some background on real-life collective prototyping

Sometimes the best way to understand the potential impact of a proposal for urban space is to build and test a lighter, cheaper and faster version of it. This allows citizens, politicians, planners and designers to experience by themselves the aesthetics, the atmospheres, and the new activities made possible by the soon-coming design.

So one of the goals of the project was to test out ideas and designs even while the participatory process was still going on. In line with the network design methodology, we decided to do this by involving the local community and getting Hamarsings to use their own means and skills, instead of bringing a totally foreign object and placing it in the square. 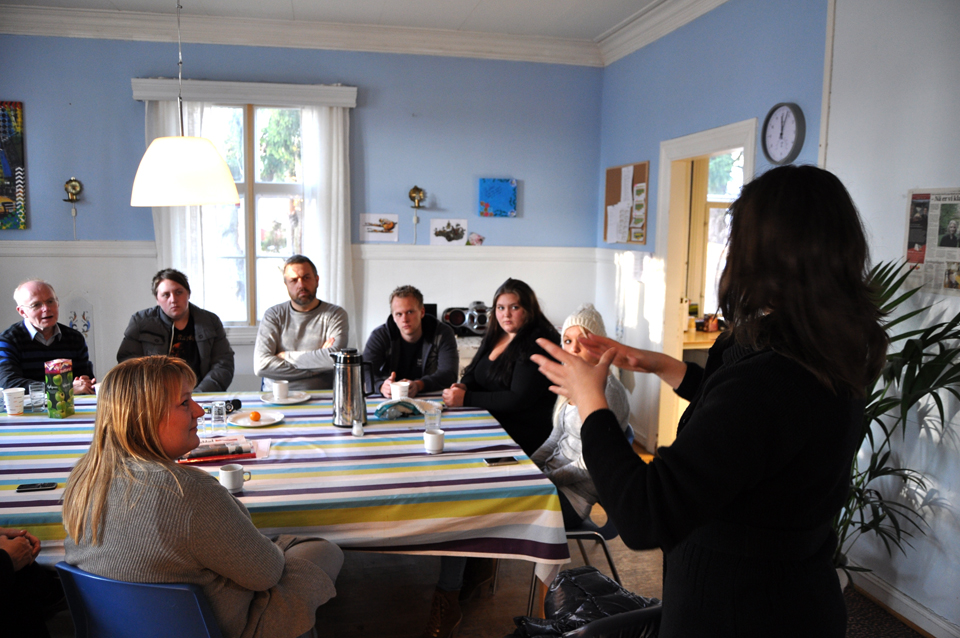 This way, we were also testing the new interactions between people around the future new place in the city centre. How would they react to the idea of building something for a common space? How would their perception of that place change after that? Could the public space be used as a catalyst for relationships between groups, collectives and individuals?

Carpentry collaboration with Ungdom i Farta

During our stay, we had the pleasure of meeting Dagfinn Nettum and Morten F. Rustad, teachers at the Ungdom i farta school in Hamar. 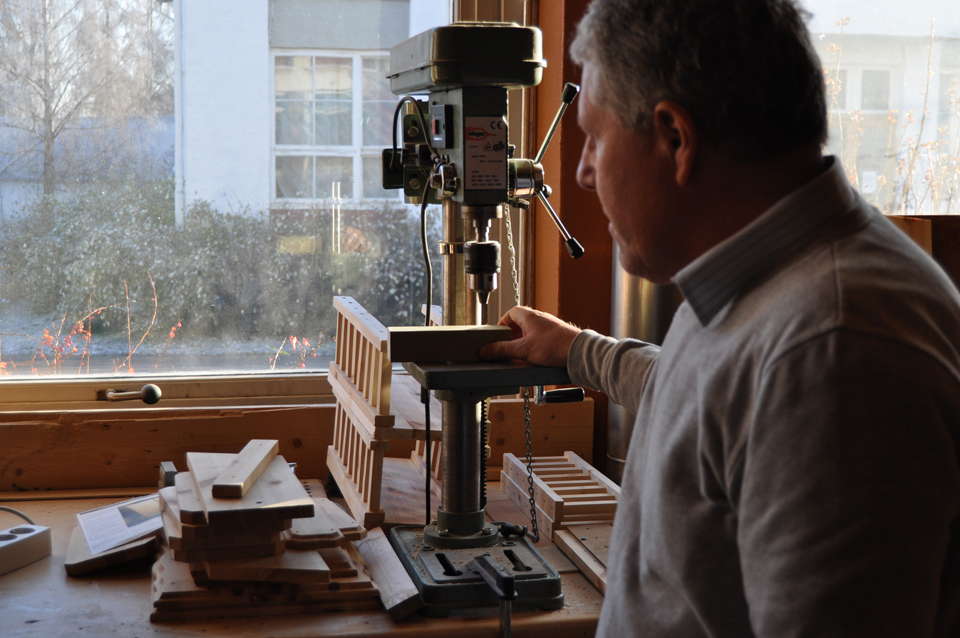 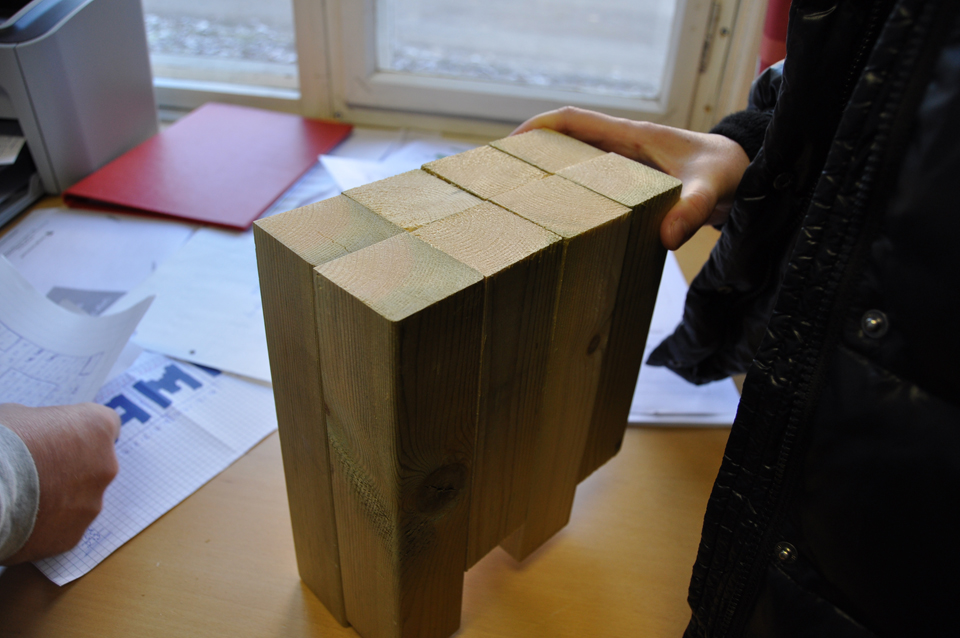 The school has a very interesting program that aims to show different professional opportunities to those who do not want to attend the high school in the regular programs. The school provides education in various skills, including carpentry, giving the youngsters the opportunity to try different occupations and test their own skills before deciding how they would like their future to be. The teachers support and assist them to make the most out of the experience and help them to really succeed in what they want to do.

We were very lucky to get to know the school and share our ideas about Dreamhamar and they were excited about collaborating with us, so we started working together right away.

We suggested they could produce new seats for Stortorget; they would be used for the Lighthamar event on December 3rd and they would remain there afterwards as a contribution from the school to the city, and also as a first approach and mockup for the future urban furniture of Stortorget. The teachers and students immediately liked the idea and agreed to work on it.

We worked together with the school and our office in Madrid to find the best looking and most efficient design to make this dream come true. Then the new wooden furniture went into production by the students at the school’s amazing carpentry workshop. 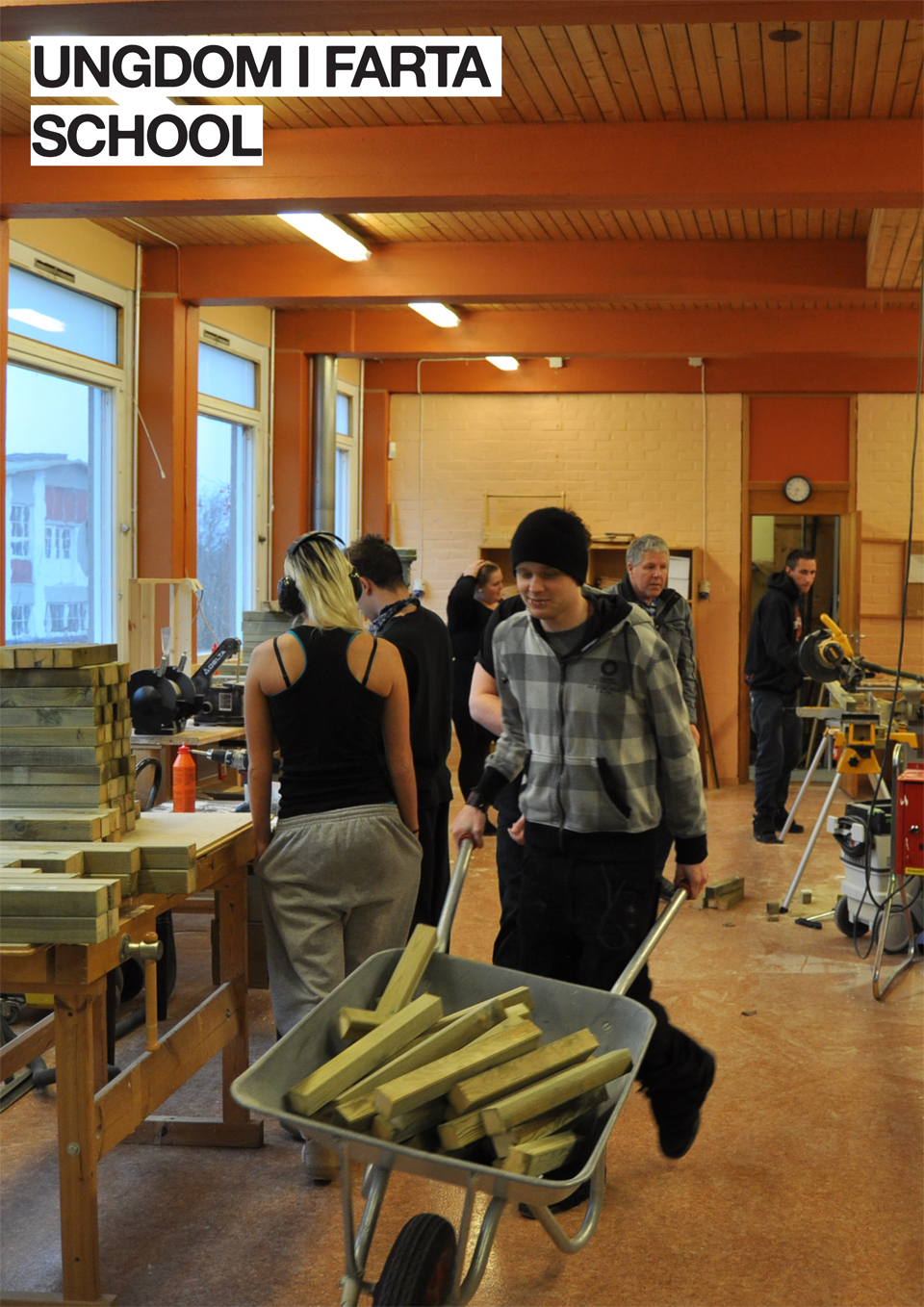 “The fascinating process of handcrafted but optimized production of the wooden seats involved cutting more than 700 meters of wood into 2500 pieces … But that didn’t put off Dagfinn and the youngsters at Ungdom i farta!”

The fascinating process of handcrafted but optimized production of the wooden seats involved cutting more than 700 meters of wood into 2500 pieces between 20 and 50 centimeters long, tinting many of them with a darker hue and then gluing and screwing them together following a three-dimensional pattern.

But that didn’t put off Dagfinn and the youngsters at Ungdom i farta! They set up a real factory at the workshop, using a chain production method in which each of the seven students had a specific task and did it efficiently. 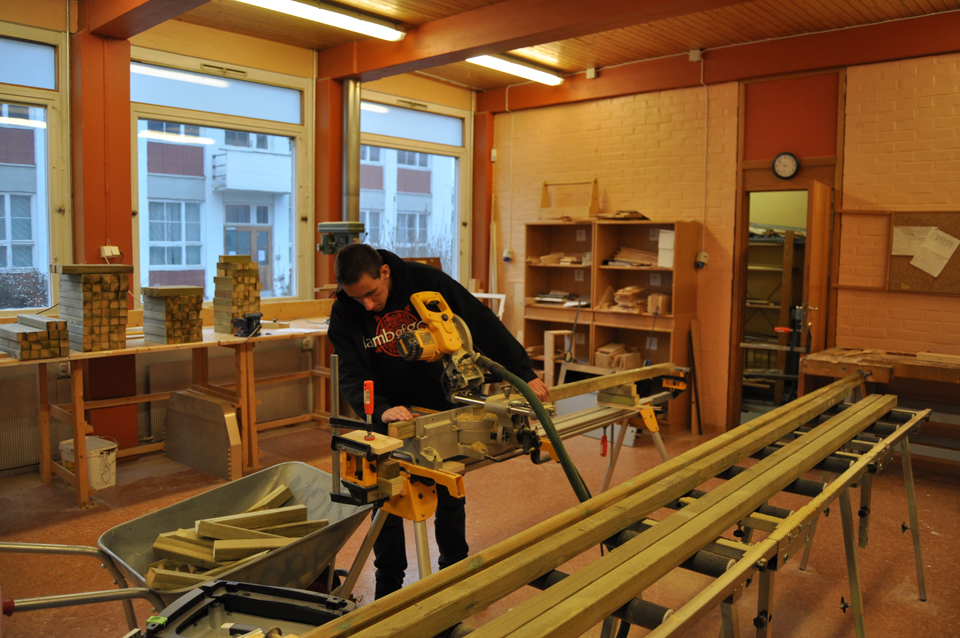 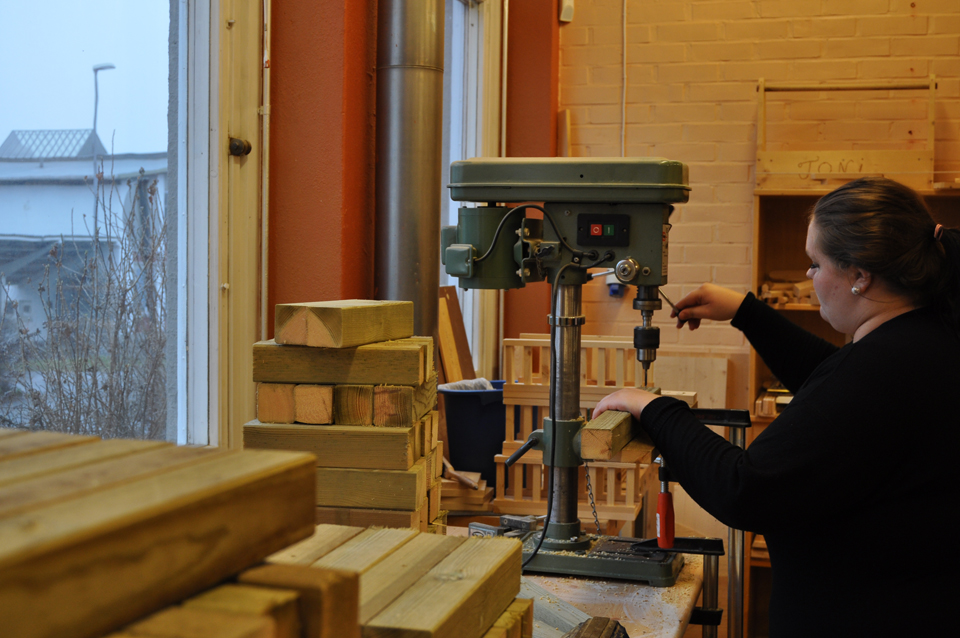 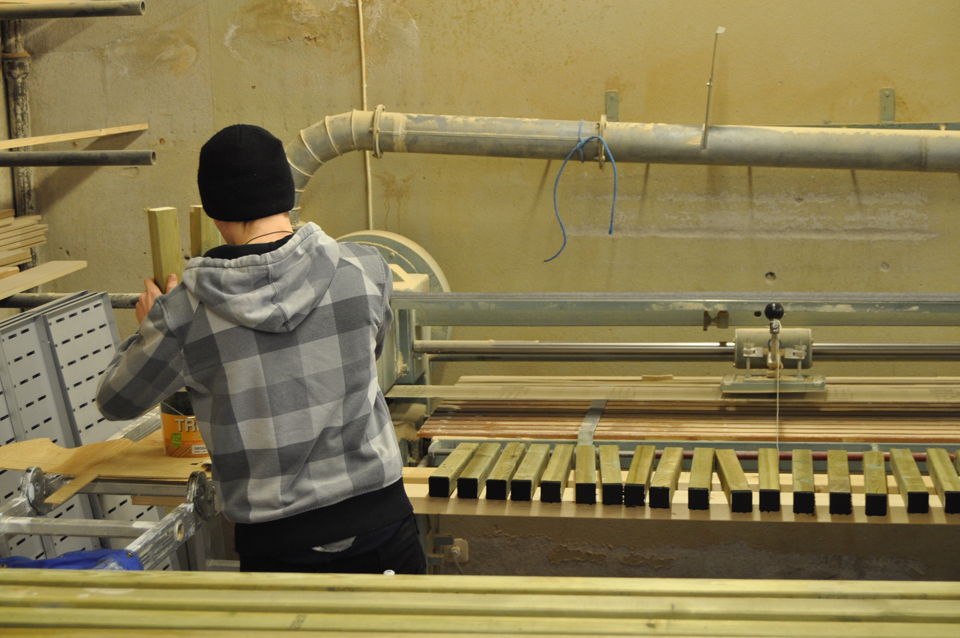 A description of the whole process, from the first drawings and partial prototype to the finished design, follows:

First, they cut the long wood laths into different sized pieces. During the first day of work, the pieces were drilled in order to receive the screws without splitting, but then they decided to use nails instead, as it would speed up the work dramatically.

Next, some of the pieces were tinted with a darker hue in order to form the letters H-A-M-A-R on the top of some of the seats. It would look something like the well-known Scrabble game, but on an urban scale.

Then, the resulting pieces were arranged together as in the final design, to see if they were being correctly matched.

At the next production step, the pieces were lined up in rows (using a specially designed wooden frame), then glued and nailed together. 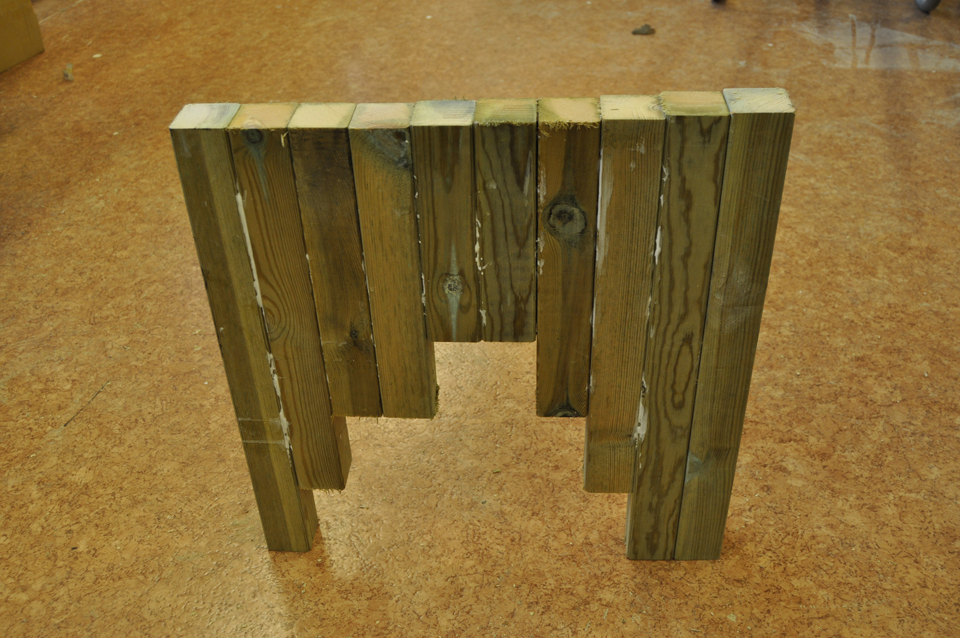 The result so far was one of the rows that, when glued together with nine similar (but slightly different) ones, would form a wooden seat made of 100 pieces.

So this process was reproduced 250 times in order to form the 25 wooden seats. 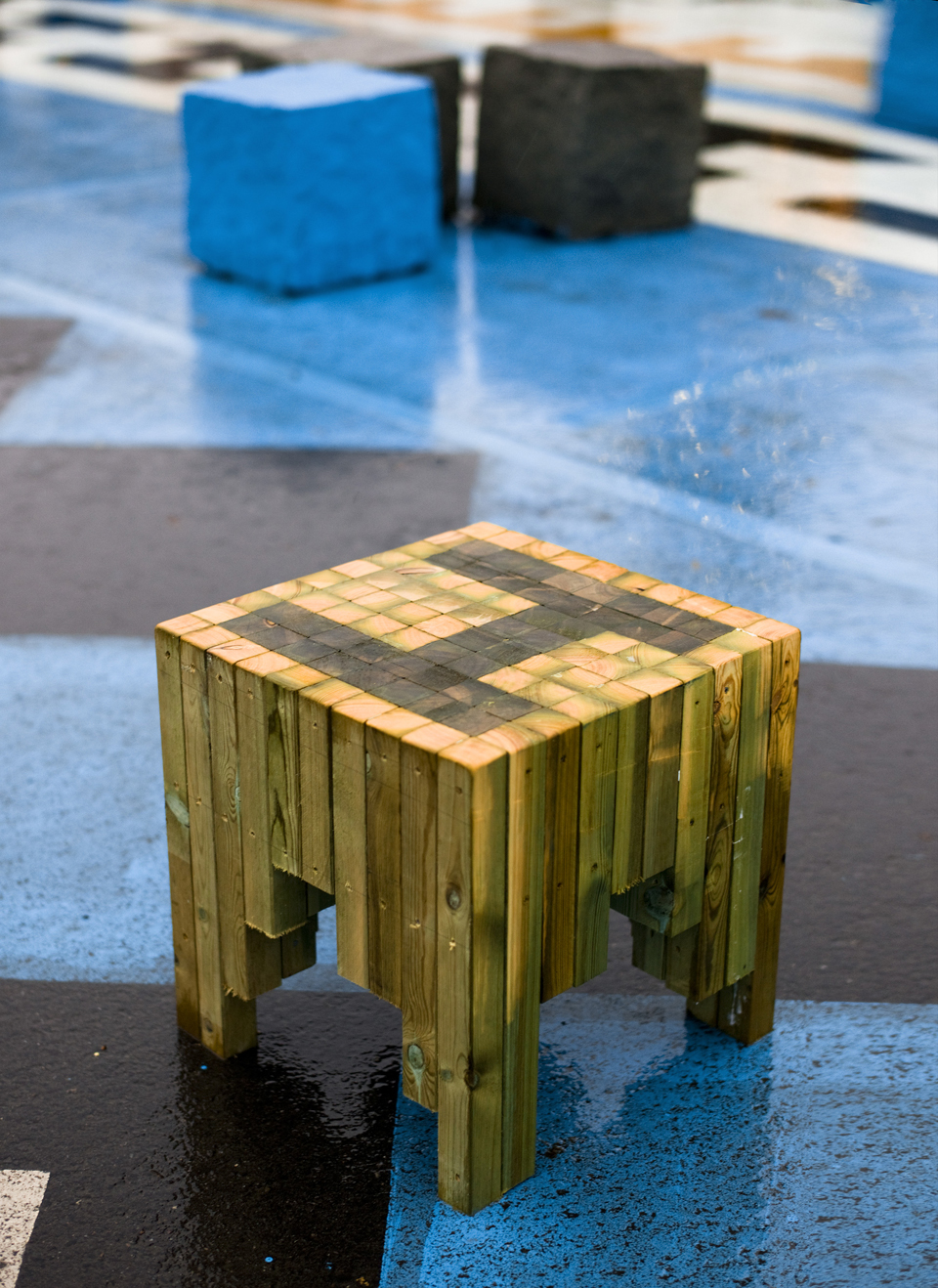 The final task was grinding and sanding the most exposed surfaces in order to soften some rough edges and to remove wooden chips that could harm the people using them.

The resulting seats were resistant, sturdy, and light enough to be moved and placed freely around the square by the people, but also heavy enough to avoid them being easily taken away.

The placing at the square

After a really fast production process that took barely one and a half weeks, we took the new stools to Stortorget, where they took part in an artistic installation and Hamar’s first flash mob.

We arranged them in rows and three interaction designers connected them to big helium-filled balloons containing interactive LEDs. During that evening, the seats were lit from above with a mild, almost magical blueish light that changed according to the music of live choirs singing in the square. People began to use them, and finally they rested there as wooden evidence of the power of collaboration and citizen engagement.

Two days after that, the first snow of the winter covered them, definitely merging them with the new urban landscape around Stortorget. Will they now slowly blend with the rest of the urban furniture? Will Hamarsings like them, use them, move them around and become used to their presence? Will we see more of them produced after the winter? 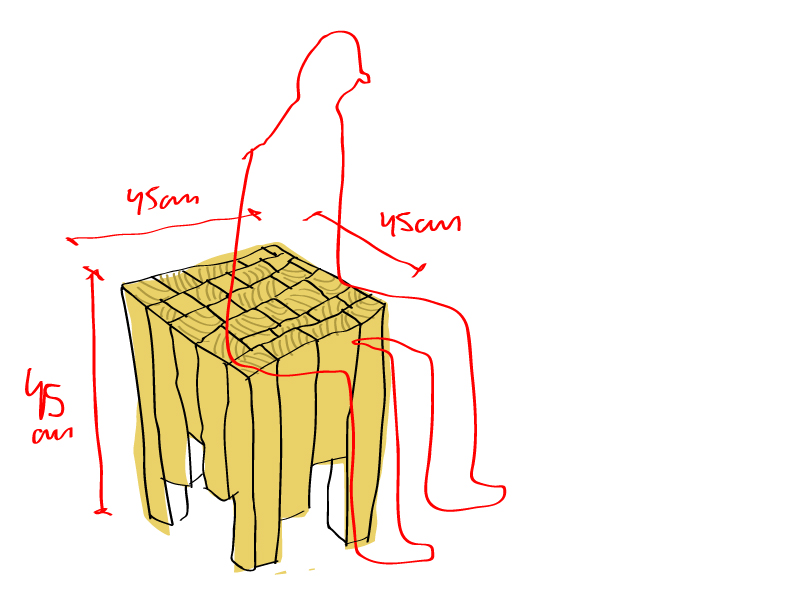 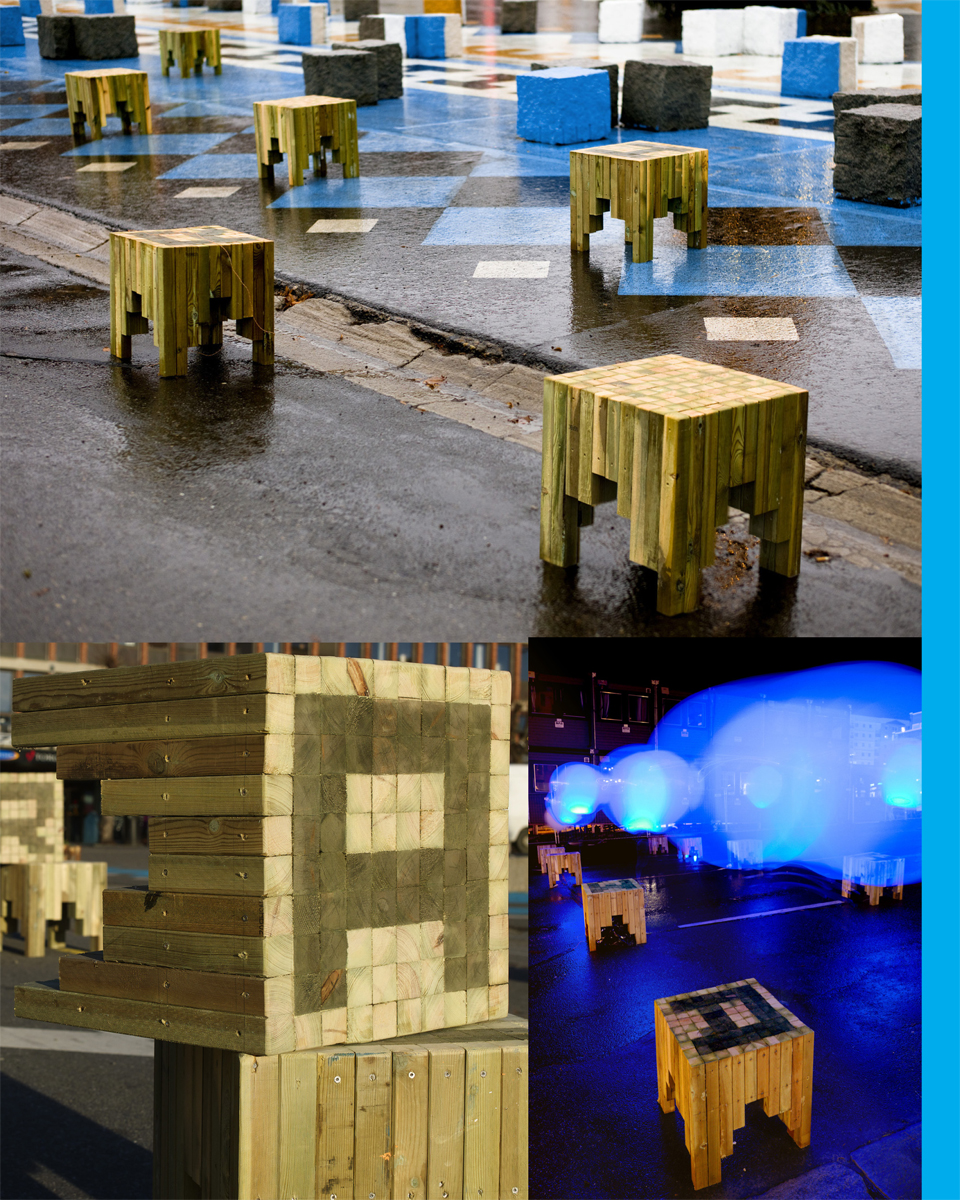 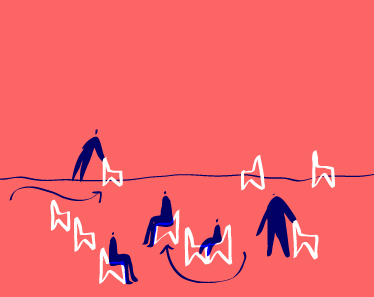