Story 2: The city as a playground 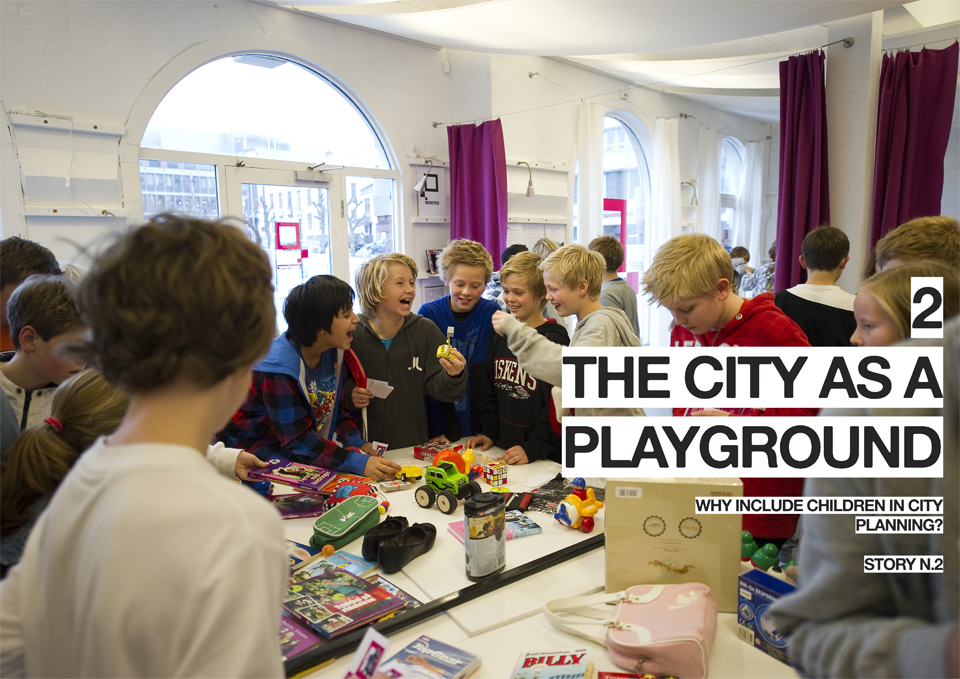 Children in the city – what role do they have?

“I visit Burger King with my family!” “I always drop by Fraspark on Saturdays!” Loud consensus ensues. A few mention a playground nearby.

I am surrounded by children aged 2 to 6 years old in the Bazaar building, who a few minutes earlier had crawled through the door, and are now telling me how they use the center of Hamar. Typical answers from many of them are the names of stores or restaurants, and the absence of activities related to play, fun and exploring. Today, 31 children from the Ankerløkka and Sagatun kindergarten are gathered to talk about the city and Stortorget, but it’s hard to keep their attention since, in the back of the room stands a long table covered with toys. The open event Playhamar took place in the Bazaar building on Saturday,  the 19th of November, with pupils specially invited from 11 schools and kids from 32 kindergartens.  But the day before there were just a few invited children gathered to switch toys and get to know each other – and to talk about their use of the city. Let’s start from the beginning. 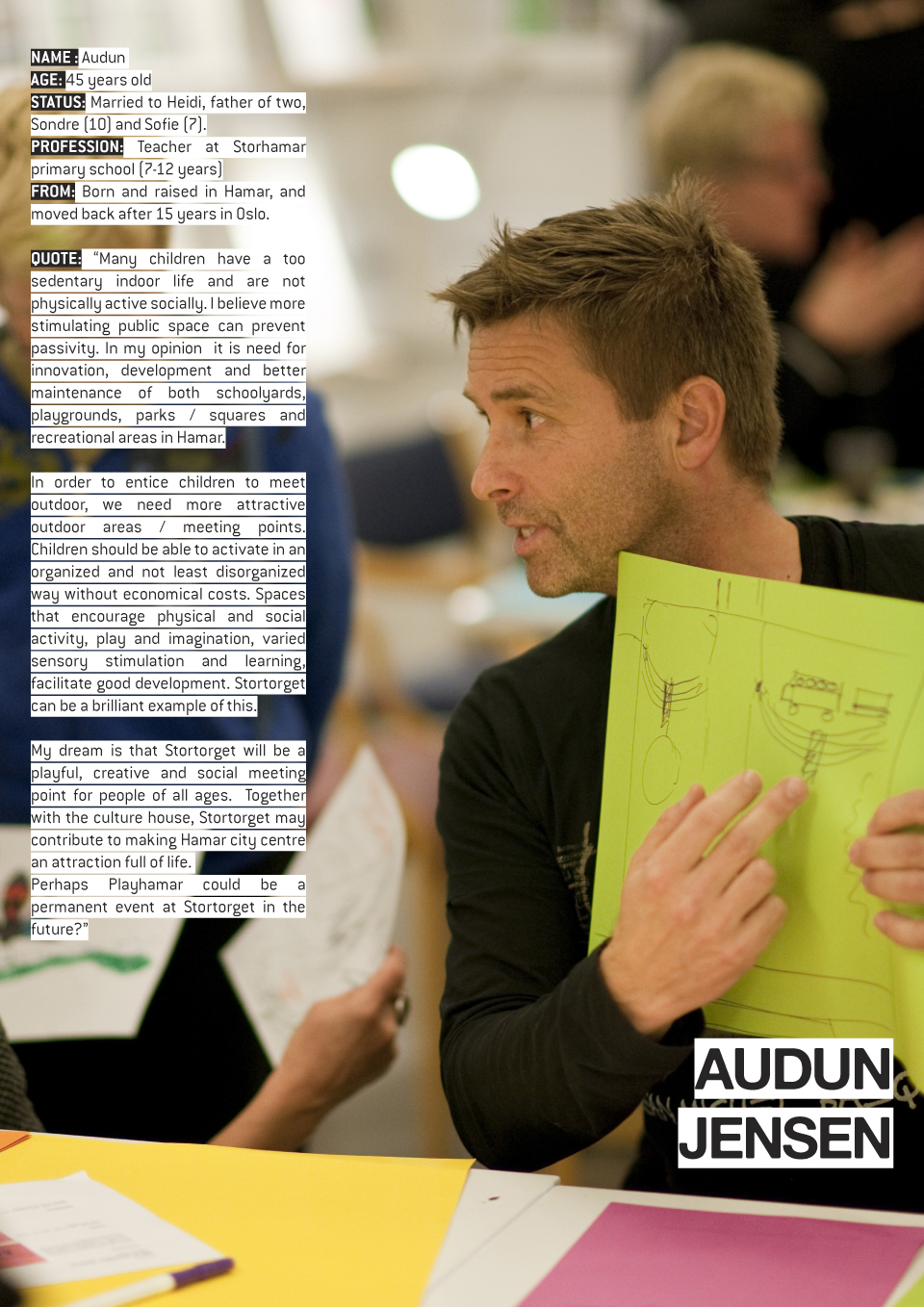 Audun Jensen was one of the first people who wrote to us and joined the on-site workshops held in the Bazaar building. Since he has been working as a Primary School teacher for the last 17 years, he has a great knowledge and concern about the grown-up conditions in Hamar, and the lack of programming for children and adolescents. He currently combines teaching at Storhamar Primary School with developing a new ball game called Brettball, an interesting game which wittily combines creativity with physical sport. One of the rules is that the kids have to design and paint their own board. The vision is to increase both physical activity and creativity among children, as they are also encouraged to find their own tricks, games and rules to use this creative game. The game is flexible, which allows kids to participate and come up with their own ideas.

After some years as an Oslo resident, Audun moved back to Hamar with his family in 2009, bringing a fresh outlook with him back to his hometown. He didn’t leave his commitment to children and young people behind when he quit his job, but always carries with him ideas about how to socialize and engage the youngsters. So on this evening, after most workshop participants had left the Bazaar building, Audun stayed behind and shared with us some of his thoughts on the role Stortorget could have for the younger generation in Hamar.  This is how the Playhamar event took shape; a local initiative to activate a group of people, with the Bazaar building and Stortorget as the arena.

Children in the city

Children in the city – what role do they have? Cities are traditionally designed and built for adults, as reflected in their materiality, scale, dimensions, design and infrastructure. However, children and young people constitute a large proportion of the population, and they have their own needs, desires, and views on how a city should work. Children can act as social glue, creating contact, activity and enjoyment. In healthy cities, children, adolescents, adults and the elderly live side by side, and take advantage of the proximity to each other, and to what urban life has to offer.

A study called Bakgården til Oslo City, (The Backyard to Oslo City), revealed the conditions for leisure and playing for children who lived and resided in the area of Hausmann in downtown Oslo. According to the report the youngest children (up to 7 or 8 years old) were using the backyards as their main play areas, while the older children were using the streets and urban spaces due to the lack of playgrounds and park areas. The shopping centre “Oslo City” and other big stores in the area played an increasingly important role as the children grew older, both as a social arena and for entertainment purposes. At the same time many children cultivated their social lives indoors, in front of the TV or the computer screen, with both virtual and realtime friends. 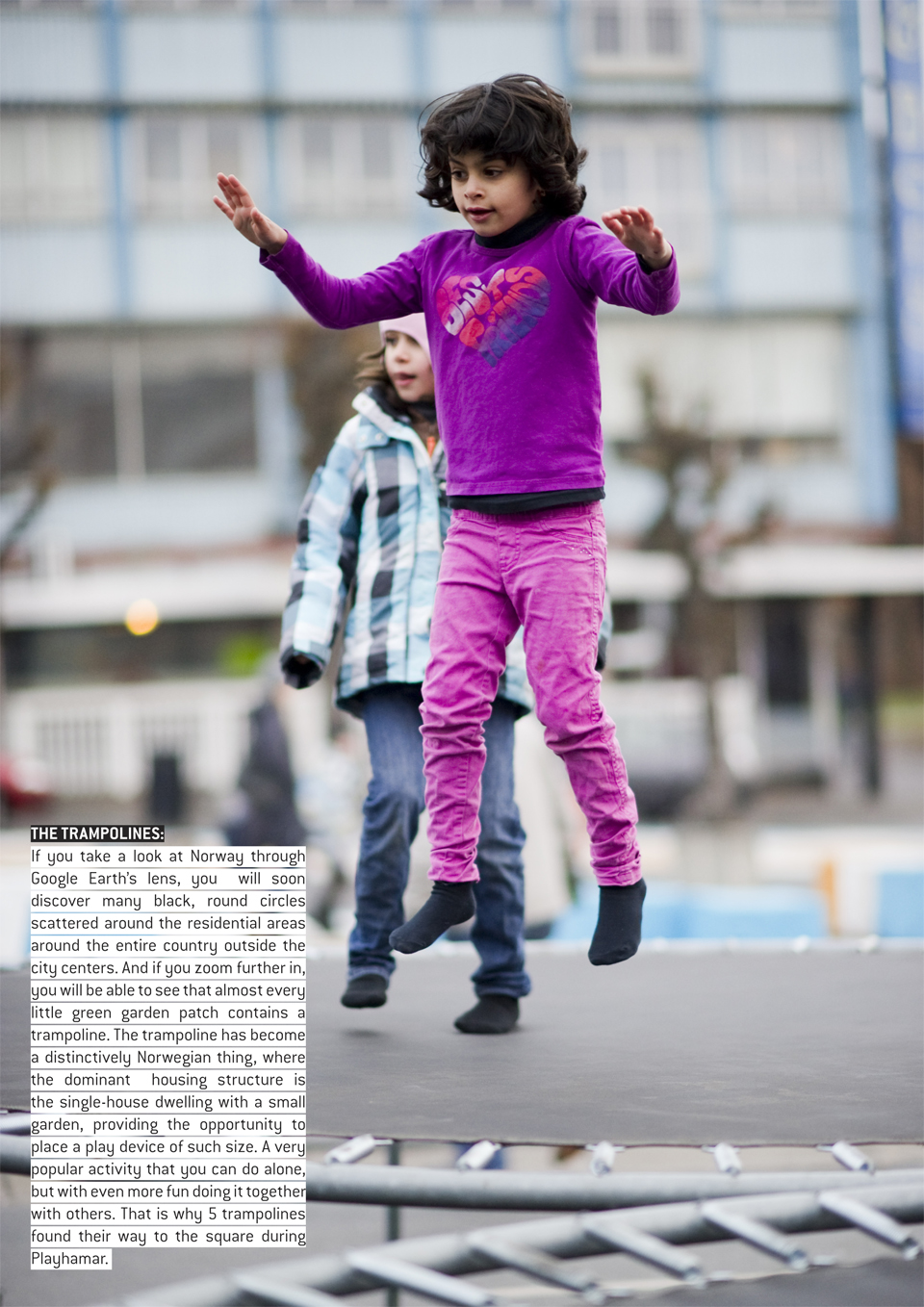 “I was outside from the beginning, getting the trampolines ready. Here, the cold and the clouded sky turned the whole thing into even more of a challenge. As people began to enter the Bazaar building I realized that nobody was coming out to the trampolines. So I just thought: let’s demonstrate how fun this can be. I took off my shoes, pulled myself onto the cold dark cloth and started jumping from one trampoline to another. Nobody was coming anyway, but hey, this was fun! I soon warmed up and after a while the kids passing by began to get interested in the new activity offered to them in that formerly plain square. The sight of it attracted more and more people, and soon there were one or two kids on each trampoline, jumping around and even trying some basic acrobatics.  At some point, I felt that the “social engine” could keep working on its own, so I took a break and became a formal adult again.”

The reason for involving children in the Dreamhamar project is to include them in city life and city planning. We wanted to show that children can learn something from the city, enjoy it, and meet others – and to show that there are activities and spaces for them. Stortorget can be a place for playing, learning and gathering without filling it up with traditionally designed play equipment or with the conventional design of something like a football field. Through the Playhamar event, we wanted to activate the younger segment of the population giving them a natural place to play in the city and in the square.

We had three intentions for Playhamar:

– An “old” toy for one child can be a new and exciting toy for another child!

– It’s fun, and a nice way to meet other children and families; maybe you will make a new friend!

– Arranged before Christmas when the focus of consumption is very high, Playhamar promotes sustainable values through re-use and non-consumerism.

Youngsters and a space of their own in the city

When a person reaches a certain age, it is considered to be human nature to start seeking independence from one´s family, and at this stage the network of friends becomes increasingly important. So where can they meet? Not everyone has furnished their “basement rooms” (particularly popular in the 1980’s in Norway), or other rooms reserved for the younger generation. Also, one might want to meet without risking the parental generation rushing through the door at any minute. Since many cities have this challenge of meeting the need for social meeting places for youngsters, often the commercial shopping centers become the preferred arena. This is problematic, given that shopping malls often mimic the public spaces in their design and use of materials, but differ from the public space regarding their opening hours, limited access and monitoring. Shopping centers and malls might appear neutral, but you as a visitor, will always be considered in relation to your purchasing power and behavior.

“My dream is that Stortorget will be a playful, creative and social meeting place for people of all ages…
…Perhaps Playhamar could be a permanent event at Stortorget in the future?”

The non-commercial Playhamar event is an example of how children can be included in the activities of the city. It also has an educational aspect. It is not only about meeting others and playing, but also encourages children to reflect about alternative and creative uses of buildings and public space in the city center, and about our culture of consumerism.

The event Playhamar can just as easily be implemented outdoors in Stortorget, during the months when the sun rises higher in the sky. Having initiated and taken part in the preparations for the Playhamar event, Audun has ownership of the idea and is well equipped to continue with similar activities for children and young people once the square is completed. And that is one of the main goals of the urban actions: to ensure that the activities and networks created during the participation process can continue to live on without Dreamhamar or ecosistema urbano’s help. 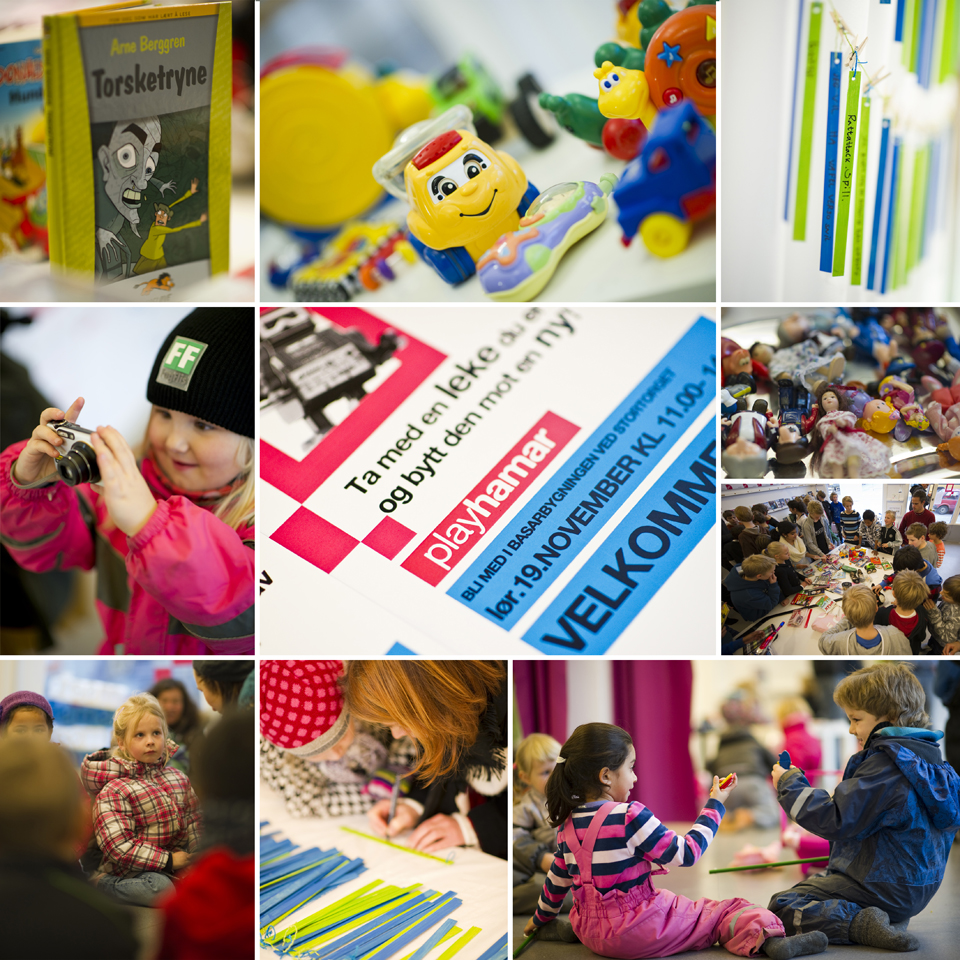