A Stortorget Square for everyone? I Creative guest Andres Walliser writes in Hamar Arbeiderblad 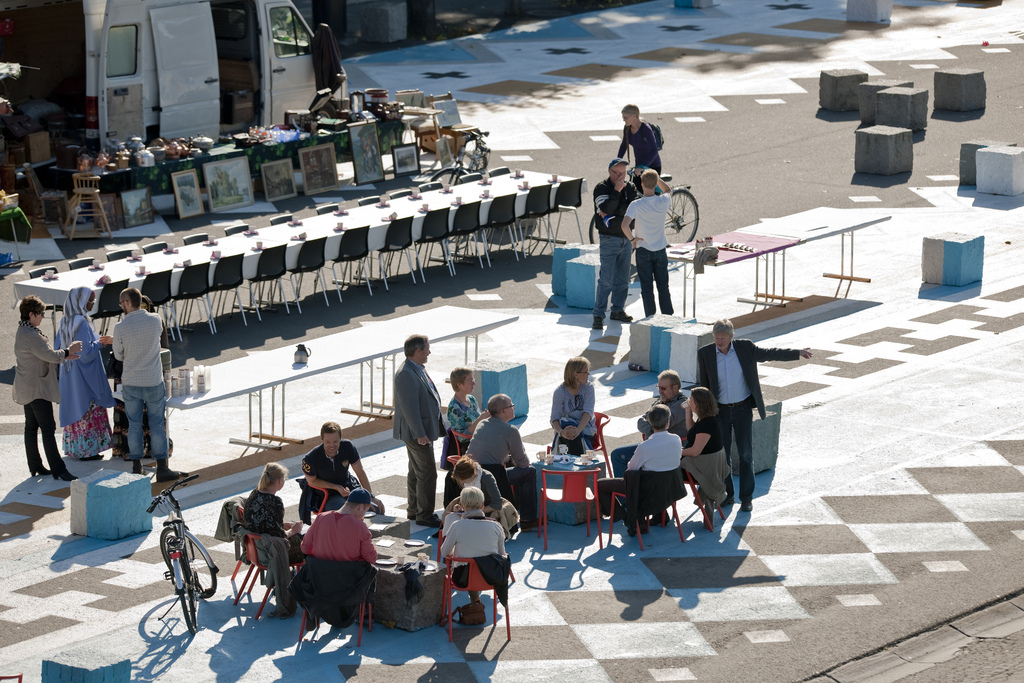 Around five years ago I was going to start a new project of regeneration in a square in the old centre of Madrid. That summer while I was on holiday I checked from abroad what was going on in that neighbourhood. The first thing that called my atention was the proposal of a neighbours organization to turn that square into a beach. An urban sandy beach to enjoy the sealess summer in Madrid. I was amazed with such an idea and I decided to contact the architects that were helping the association and have designed this project. It was Ecosistema Urbano.

Now it comes the turn of Stortorget square in Hamar, where Ecosistema Urbano is implementing Network Design methodology to enhance participation among a completely wide range of residents jointly with other stakeholders, including a virtual community in the web from different parts of the world. The project dreamhamar, was initially regarded as an art project but it has turned now in one of the most promising participative experiences in Europe. The challenge is big. Participation becomes more complex with the dimensions of the project. It is not only that Stortorget is a rather big public space, a big potential, but also a risk. It´s also a reference for a whole city and its surroundings, not just for the residents around. Furthermore, Stortorget will be a visible part of the city of Hamar as its presentation card to the rest of the country.

Network Design is a dynamic methodology that puts together elements of different disciplines that have a say in urban regeneration, especially in public spaces: arquitects, engineers, sociologists, artists and other professionals have a say in the design of the square and specially in the way people´s proposals can be developed and included. So far the in the project residents and other stakeholders are the protagonists jointly with experts of different background and nationality. For me, as one of these, dreamhamar is becoming a fascinating personal and professional challenge. The online workshop that I have conducted in October –Public Space and People– has gave me the chance of learning about the project, the social dimensions of public space in Norway and some of the keys about what people in Hamar need and want in their square.

Public spaces, and specially those with the characteristics of Stortorget are inherently multidimensional and dynamic. Hamar´s main square is a space of centrality to be reinvented, it articulates the city´s main business and shopping streets with some of it´s most important facilities, like the culture house now in progress. It´s also the most appealing access to Hamar´s soul mate: Mjøsa lake. The square, dream, design and enjoyed by the people of Hamar will be recovered as a place: a space with its own meanings, symbolism and image for the people who use it regularly. This process will make of Stortorget also an attractive reference for Norwegians as a living example of the potential of citizens deciding how they want their city to be: an open, inclusive and accessible place in which lots of things can happen: enjoying, meeting, working, learning, playing, reading, falling in love, or just passing by.

Uses and perceptions in public spaces keep on changing along time. In our case the people using them and the management responsible for it should be ready to make of them new opportunities for the square in the future and keep the square as a vivid and stimulating environment to do things in it. A place in which action takes place, no matter if it is a sunny summer evening, or a snowy, freezing Sunday morning.

The brilliant use of the new technologies, one of Ecosistema Urbano´s main features has allow me to work on the project, not only with people of other parts of the world, but also, with some local experts. Geir Cock, working in the municipality of Hamar, has helped me to understand the participative mechanisms already existing in the city Hamar, how they work, and some of the preferences of the citizens in the way they take part in decision making in the city. Mocci Ryen has shared with me some of her enthusiasm for making of Stortorget a space of inclusion, integration and dreams. Next November 9 and 10th I will be developing a workshop and conference in Hamar about Public Space and People, just a day after Mocci´s workshop held the 8th of November at 18.00 in the Basarbuilding on integration and accessibility. Welcome!

This article was originally published in the local newspaper Hamar Arbeiderblad 5.11.2011