“Space is a practiced place. Thus the street geometrically defined by urban planning is transformed into a space by walkers. In the same way, an act of reading is the space produced by the practice of a particular place: a written text, i.e.: a place constituted by a system of signs”
de certeau, 1984

After the first week of my participation in the workshop, I want to write down some of my observations on the main theme – the design process of Stortorget in Hamar. After the first analysis, there are several points which I want to share with you. The first one relates to the types of users of the square. I´ve decided to distinguish three main types:
1. a person who goes into the square, specifically there, with a defined aim, so the square turns into a place > a place to stay;
2. the second type is a passerby, and in this situation, the square serves as a communication between one place and another and is not the goal in itself;
3. the third type is a user-flaneur, walker, who walks around whole town, and therefore also on the square. Will he stay on it or not – we don’t know it, for him the square is a part of the interior of the town and he just derives pleasure from walking-watching – that action itself is for him an interesting activity, a kind of game.

For everybody that square becomes a kind of text which they can read, interpret or play with in their own way. From this point of view, for me, the square is a dynamic space > place. It changes with the look of each type of space users. So probably the square should respond to the needs of each of these three groups > it should be a place where you want to stay, but communication should also be well-resolved with comfortable access for a variety of places on the square and outside of it and in the same time should have an exciting stimulus for the contemporary flâneur. 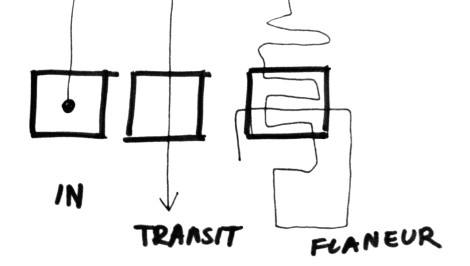 Another point – the second one, is connected with the first one. I would like to treat Stortorget like a strongly linked space with different networks from the surroundings. I mean that I want to avoid treating it as a separate square – but I want to see it in context and not isolated on the map. Thinking about it, another important issue comes to my mind: do we have enough information about the usage of the square and the surroundings now? And if we want to create an interactive square in the future, do we have enough tools which will meet new requirements?

I would like to avoid the solution which is typical in most projects of furnishing urban spaces – the standardization and usage of solutions from catalogues. This kind of solutions, in my opinion, only lead to quite bizarre situation that the public spaces become a kind of non-places > without their own identity and their own history, but become a kind of replica of something what is elsewhere.

For this, an interesting option seems to me an analysis of the buildings around the square and those in closest area and on its basis, to prepare a list of actions performed before entering those buildings and after leaving them. I mean, a list of answers which will reply for example to the following questions: what do we do when we go to the library and what we do after leaving? And what steps do we perform, or more importantly what we want to do, when we go to the theater or cinema, and when we come out? What kind of furniture is needed there? What kind of light? What kind of situations could be created?

Thinking about a tool that could be used, the surveillance camera came to my mind and the question related with this issue: for what could be used the views of the streams of people on the square and its surroundings? And what about the info about the speed of walks across the square and the info about the directions of walks? Could they serve us as a source of useful information during creative activities within the square? Imagine, what would give us the message that from a particular direction in the concrete hour, go only ladies in middle-age in small groups, and from other street go usually single men, and from another ordinarily run out almost only children?

Could the possibility of registration of such images and then analysis of them, be used as a tool which could help create a plan – an interactive program, which would allow planning better adaptiations of the square, straight connected with the needs of users? Is it possible, on the basis of such analysis, to create an action corresponding to the analysis in real time like for a example moving lights? Will another layer of activity would arise in Stortorget?