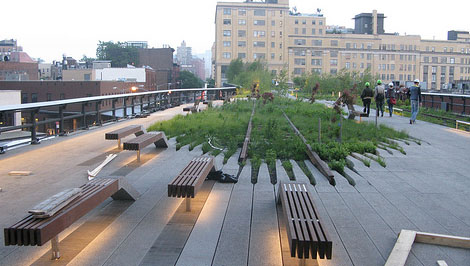 Photography by Jesse Chehak and Paul Schlacter; courtesy of the High Line and flickr.

“The High Line was built in the 1930s, as part of a massive public-private infrastructure project called the West Side Improvement. It lifted freight traffic 30 feet in the air, removing dangerous trains from the streets ofManhattan’s largest industrial district. No trains have run on the High Line since 1980. Friends of the High Line, a community-based non-profit group, formed in 1999 when the historic structure was under threat of demolition. Friends of the High Line works in partnership with the City ofNew Yorkto preserve and maintain the structure as an elevated public park.

I think the story of this project began along time ago when the city ofNew Yorkauthorized street-level railroad tracks downManhattan’sWest Sidein 1847, after that so many accidents occurred and after years of public debates they started the High line project. In the 50s there was a drop on the rail traffic due to the growth of interstate trucking and in the next couple decades it became abandoned (and part of it was demolished)

Then the need of public parks in the city and the fear of demolishing this historic structure led to this project.