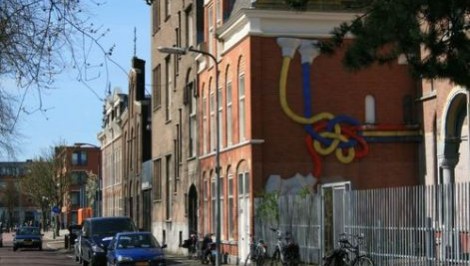 In this post im telling a story about two individuals who encouraged the people of the neighborhood to take part in improving public space and getting together to solve problems of the community. Also how can we connect to one another in the best possible way without conflict.

Williem Giezeman and Nol are the occupants of a large house in Hague witch is based between a Catholic Church  on the one side and the Mosque on the other, so ti resembles a gap or a connection point between two religions. They didn’t do anything except sit visibly in the front room drinking cups of tea, but they were only being a ‘presence’ for the passing viewers. And slowly but surely people started taking interest in what they were doing. Now the house is alive with people coming and going and projects mushrooming everywhere you look: sports clubs, internships, language lessons, events.  This isn’t just another clever way of infiltrating communities and gaining trust.  Willem and Nol are citizens who volunteer to this project.  They are not imposing on this community, they are an integral part of it.  The welcoming and relaxed atmosphere they have created is not the same as a professionally run community centre – this house is truly a ‘common space’…  a new type of ‘public space’ as they describe in the Netherlands. It opens a new idea of thinking on how to interact with the community and how can ordinary people be more involved in their neighborhood and not making a difference of what religion you are. Because  Willem’s and Nol’s benign presence is creating bridging social capital and a contagious and soothing balm in this neighbourhood.  The position of their building is literally forming a bridge between 2 faiths. They are certainly changing how the neighbourhood ‘feels’ – their gentle approach to leadership is having an impact – one that emerges slowly from the connections and relationships that their social space has created. Best example of that is the sofa they created for Woman’s day 3 years ago, women from both the church and the Mosque, and lots of others, came together for weeks to mosaic this ‘social object’. From that emerges an idea of ”Making is connecting”. Limerick student Bozidar Milosevic