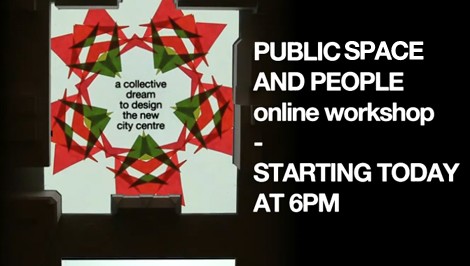 Public spaces have been one of the defining elements of the urban condition,
whereas a city or a hamlet. This workshop aims to look at public space from a
social point of view. The workshop will focus on different uses of public space in
relation with social, cultural, political, and environmental variables; the evolution
of public space in urban contexts, and the role of people in public space
development through practice, use, and participatory tools.

Public space can be the result of a customary use along time, or of urban
planning as a given space with different functions like representation,
social control, or commercial, among others. It also can be the outcome
of a participation process – both top down (this is launched by the public
administration), or bottom up, demanded by the residents.

The workshop will be illustrated with examples reviewing both public spaces
along history and recent relevant cases of innovation in urban and social
design.

We will look at the initial conditions of participation in Norwegian society and we
will try to look to the impacts that Dream Hamar might have in the local society.
Stortorget is a very specific public space in Hamar, which is a city funded only
150 years ago and with a preconcieved urban form. Some of the functions of
a C19th square might have change along the decades, but others remain the
same. There are other potential functions that can bridge the gaps between
both and incorpórate new functions.

The project so far has become a laboratory for different societal variables that
will show key for the future of the city and its residents. Stortorget reform aims
not only at increasing the use of it as public space buta also to turn it into a
place, which is the desired outcome behind the basic ecuation of public space
+ people. The fact that last summer 20.000 people gathered in the square after
the massive killing of youth in Utoya island probably has triggered the attention
of both residents and political institutions about the meaning and functions of
the square. This gathering summed more than two thirds of Hamar´s population
(24.000).

The preliminary study presented by EU is targeting at the potential uses
and meanings of the square in the daily experience but also in the symbolic
and identity realm. The challenge of localy rooted identities with rather low
participation in politics beyond electoral calls, a relevant social tissue of
sports and cultural associations and initiatives both private and public sets the
scenario for a challenging but potentially rich outcome. This would eventualy
turn the square not only in a spacial reference for residents but also a place to
exchange with other residents, spend leisure time and definetively a substantial
part in the residents urban experience. So far the interest and involvement of residents is increasing but more at an individual level than on a community dimension.

The workshop will, therefore tackle issues of public space from the perspective
of the different actors involve in it and will provide insights to the participatnts
for the design of the program and interventions in the Stortorget square on the
guidelines presented in the preliminary strategy by Ecosistema Urbano.