We started working with students who seem very interested in DreamHamar project.

We are trying to individuate the “urban quality” of the Stortorget, at three scales of approach:
– The square, this interesting “urban interior”
– The area of ​​the city center
– The main morphological relationships between Stortorget and  functional or symbolic elements at the urban scale.

The students are producing:
– A physical model of the Stortorget, scale 1:200
– Ten lines of first impressions in English
– Morphological patterns of the relationship between city and Stortorget and the internal spatial components of the Stortorget. 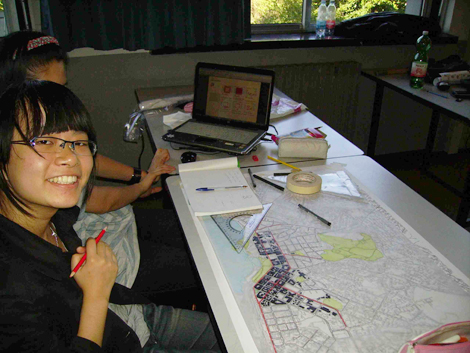 This is one of the comments of the working groups:
“On the third year of our studies we get the possibility to work on Stortorget in Hamar, the potential seems to us one of the greatest: to work on a space in progress, an urban void to fill with life and experiences. We’ve noticed an active participation from the people of Hamar, the public bodies, architecture schools and professionals from many countries, and we believe in the network of ideas that’s been created around Stortorget thinking of it as a great opportunity to confront our work with the work of others, learn from further schools and cultures. The online workshop is also making us think this is a real contemporary possibility we’re given. Many labs of Design deal with the concept of squares and public space, but most take part from a still place while Stortorget in Hamar is just existing and changing continuously, a demonstration of the attention it is given from the people of Hamar who  want to pluck out the cars parked at the center of the town and give back this space to the inhabitants, making of Stortorget the center of many stories to come, a new postcard of the city, a place to feel comfortable, a place to spend time. We are also interested in studying the north’s square and public space, completely different from ours, with different surrounding and nature, and with this we want to emphasize the sustainable component which will be part of the project as much as the study of light and climate, and the recall to the theme of hybridization between artificial and natural materials and spaces.”