I had read the last posts and I wanted to comment some of them. When I started to write down some comments, I realized how they are linked one to another so I decided to post a reflection about that. Now, I see that we are all working on the same issue and all proposals and considerations go in the same way… As we started from different points of view and different backgrounds, now I see that more often and often, we have the similar conclusions…It’s an interesting feeling and I find it super-inspiring!

In the most of posts, I can see that the participation process is a very important aspect in the design process of Stortorget. It’s interesting how we can define the term of participation itself. I realized how this term is multilayered and complicated. Thanks to Andres who, during the third open session, was talking about the partipatory model which in reality exists in the design process of Stortorget. It’s really helpful to see all levels of connections between different groups of people and see where in all this there’s a place for participation.

As we find the places where the participation could appear, how could we develop that issue? As Andres mentioned, there is also political process and technical process which go together with the participative process. As we have to harmonize with that structure during the designing process of Stortorget, what could we do after the project is finished and built ? Is this here a chance to extend this participative part, to a real future life of the square? I think that it is a challege too.

Process of building a community/making connections between people during the designing process – it is important for having people who will care later about the square, who will be the concious users of the public space. I think that here it’s important to remember what mentioned Geir, the invited architect from Hamar, in our chat during 3rd open session of workshop: “I think all public space needs maintenance, not only its physical features but also the life itself.” So the community around the square could help with that because of feeling involved into a process, thereby they start to feel that they’re a part of it.

Here I find also very important issue which Silvia wrote in her post “It seems to me that we are living two different realities in the north and south of Europe, but I wonder if this is also reflected in a different approach to the participatory processes.” I completely agree with her statment, that we all live in so different places in the world, so also the approach to a participation itself is probably different…so maybe here we sometimes talk about the things which are not understable for the citizens of Hamar, or are just obvious for them or even rare?

I experienced it, here, in Spain where I’m living now. Spain is a special case for me, a place where the public spaces should be treated with a special care. I understood that before  I moved here, more, I was sure about that! People here lead very “external” lifestyle. This is a big difference for me. In Poland, my native country, also because of the climate, such a situation does not occur on the big scale. People do not spend hours outside of their homes. Here, sometimes I feel that the only thing they do in their homes is sleeping. From the morning until late hours at night there is a crowd everywhere, despite the fact that Vigo is definitely not a tourist destination. So there are residents who are taking advantage of the favorable climate, and a large part of daily activities performe on the open air. This is why I was convinced of the fact that space has to be extremely friendly to them. However after many walks it turned out that it is not true….So for us it’s also a challenge to understand how the people feel in urban spaces. To this question Geir gave me an answer during a session: “People enjoy urban public spaces if they find a seat in the sun, and the possibility to see people, meet friends. Even activities in urban landscape are popular, not only skating, but also cycling (like tricks) and parkour.”

I like thinking about the Strotorget as ‘work-in-progress’ space. The square which will never stop to be a inspiring space and always be a start point for making the new connections between the people. What are the ways to maintain this participative aspect?

For sure,  one of the oportunities is making the designed parts of the square flexible to a temporary needs. Matias wrote also in his post about it. The good example for this kind of solutions, which I really like, is also a project of Raumlabor: “construisez un banc dans votre ville’. As they tell in the description: “The Generator is an experimental building laboratory for instant, participatory building practices in public space. It consists of two components: hardware and software. The hardware is a workstation designed for mobility. A set of several tools, specially designed workbenches and templates are made available to participants to assemble different objects or furniture for the public domain. The generator project only uses recyclable materials like simple wood slats and plywood as building materials. (…) The participants can transform the modules accidentally or intentionally, in the process of learning by doing.” 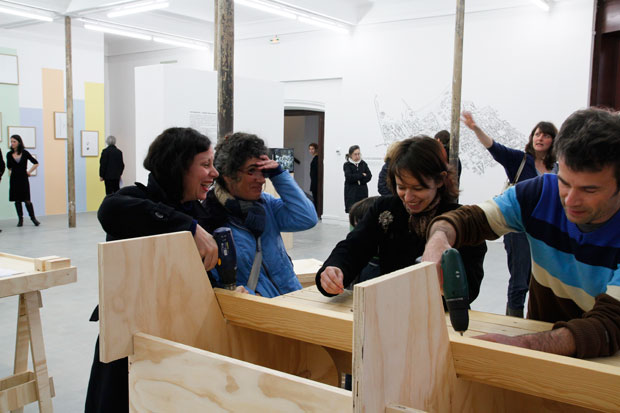 Another opportunity  could be an interaction between two layers of Stortorget which proposed Susana: the real and the virtual parts of the square? I see it as a possible layer of the square which allows to link this two issues in smart way and it is also a inspiring tool for a developing of community connecting process. Maybe it could work as a open-process not-ended project and on its base, the different communities/actions could appear in some specific time and  place?

I think that also Christian talks about life of the Stortorget in this way. What I find really interesting to me, it’s his division between ‘if’ and ‘then’ and clear statment in each of two parts. I think this method could be useful also for defining the programme of  this points which I mentioned above. Mainly because of that the mistake of not thinking about of all possible concequences is constantly repeated…

What are other possibilities to maintain a participative process?