This concept is probably one of those who has been more often appropiated, adbucted, emptied and refiled, but also dreamt about, action inspiring and ocasionally taken place.

Despite this vagueness, participation can be defined as the process through which citizens at an individual, group or collective level, namely civil society manage to influence in the design, decision making, implementation and evaluation of the results of a given policy or program.

Coming out from this very basic definition, there are some relevant questions addressed in some of the posts of the Dreamhamar blog.

Participation can take place in any of the stages described, and can have many different outcomes. Participation does not mean necessarily to be capable of influencing. Often the concept is used to legitimize policies and programs which are already design. Participation can be wrongly defined as the mere act of information about something that will happened under any circumstance. The right to information is an essential part of the participative process but it is not “it” by itself. 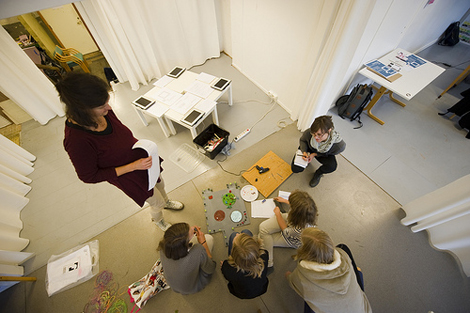 Often the participatory intensity of a process lays on the informative part and eventually in the chances that citizens are given to exercise their right to voice. Whether this is binding or not is another issue, and whether there is political will and sensibility towards stakeholders ideas and demands is something different.

One of the most important lessons we should learn about participation is that it is not enough to have the means, this is the formal tools or mechanisms that a given public administration puts in our hands. There also needs to be other elements that fuel, oil and drive the process. A participatory process requires among all the will to participate, both by citizens and the public administration, among other stakeholders. People have to feel need the (rare) necessity of taking part, of contributing and eventually feel part of a community, or of a process. A lot of good initiatives might fail because there is not enough support from potential participants.

Christian Hjelle has incorporated this factor in his post in DreamHamar with a quote that forecasted the future of participation, or rather the future of the attitudes to participation. In thirty years time people would not have time for participation (POSSIBILITIES FOR PROCEEDING THE PARTICIPATION?). Thirty years from 1972 when Niegel Cross wrote it, is more or less today. Time has become a key element for participation. Generally times does not associate fruitfully with participation. Participation is often embeded in policy and political processes, and often these have tight time constrains which are either use to disregard its potential outcomes (it takes too long, its to uncertain, and sometimes too risky for power) or to limit its span to the period for which politicians are in office, generally four years. A lot of processes of participation do not deal just with something that takes place in a given moment, but rather with issues that are processes, than contain dynamic elements that will develop along time. At least in the short and mid run. Some outcomes of these participatory processes are not immediate and some, most of them are uncertain. Participation makes policy and programmes more efficient (in principle) and suposedly more closer to people´s needs and will. But uncertainty is not a quality appreciated in these days, despite it rules in an increasing maner our very daily lives, not to speak about our interaction with the city or the institutions. The more uncertain our environment is, the more certainty we need and this comes hand by hand with the need of instant gratification. Social and political life with it seems to have been turned into a hidroponic cultivation, if the methaphore is allowed. The secuence of preparing the soil, planting a seed, watering and lighting it, and waiting seems to be completely out of our parameters. And this applies too to participation in most cases.

(Silvia Schiaulini also talks about this in her posts.)

So far we are talking about participation from an institutional point of view, as policy tool which can potentially improve the results of policy making and performance. This improvement cames through adding complexity to it: different points of view, sharing power, discussing, devolving, etc. and crushes with some rooted paradigms of public administration. Asuming this paradox, still top down participation (the one emanated from the institutions) has been introduced in the last twenty years in different policy environments, specially in those related with urban policy in different fields ranging from planning, to education, health or service management. Often participation has ben used as a tool to decentralize decisión making and incorporating non public actors into the policy process such as non-profit and for profit organisations (NGOs, grassroots, enterprises and so on). The best example are is the reform of local government and its shift into governance in Western Europe since the early 90´s.

Some key questions arise around participation. Is participation legitimate? This is are the stakeholders taking part in it representative of society as a whole or just of some interest groups? Should participation be expected to be an act of the majority, or those who take the concern? Is participation always positive for the policy process? Does it always add efficiency? Are the mechanisms of participation limiting the virtues of it or rather shape and enhance it?

Other forms of participation are expressed out or against the institutional realm. Bottom-up participation is the expression of the demands of citizens to take part and influence the policy process and program implementation. Some times it makes its way through consense with the public administration and with other stakeholders with different interests. Others it is ch anneled through mobilization and confrontation. Bottom-up participation can also take place out of the boundaries of the public realm, in its frindges and interstices.

Therefore participation in urban politics is a process that adds complexity to improve the policy process in all its stages, but paradoxically seeks to improve its quality, through its outputs, make it more democratic and transparent, open it to the general public and improve urban life.
Is this all true?