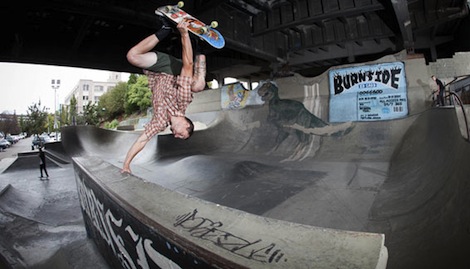 Burnside is one of the most famous skate parks in the world. The city of Portland, Oregon banned skating in streets in the 90’s forcing skaters to leave the city center. A group of skaters found a empty space below the burnside bridge, a deprived area full of poverty, drugs, abandon lots and empty buildings.

Without any permission, they started to build concrete ramps using makeshift tools, ripped bags of discount cement and leftover concrete from local masonry contractors. The skate park began to reactivate the neighborhood and new businesses like skate shops and bars were opened while the concrete spread everywhere.

Now the skate park cover 1000 square meters area, is has been legalized and praised by local authorities and has created a strong community of skaters and urban artists that look after it. Even many of the individuals that worked on the first instances of burnside have founded skatepark companies winning contracts to build public skateparks throughout the states. Javier Burón