It’s not about the square itself, but about the people that brings live to it.

Yesterday’s workshop was a great sight for the eye and the heart. Elger Blitz (CARVE, NL), an architect specializing in designing playgrounds came all the way for Amsterdam to share his ideas about PLAYING.

Participants had all different backgrounds and ages. Elger showed us a footage he had put together for that occasion. “It is hard to know how things are from afar, so I decided to show you something that is not related”.

The presentation started with Huizinga Johan a Dutch historian from the 19th century talking about “Homo Ludens”, the playing man. Then, a short film about the international situationists, a progressive group of political artists influencing today urban planning, re-thinking the city from routine and work to a playground, and idea still very present in the minds of urban planners – the city as a playground. Later, we watched “Les deux plateaux” an art piece by Daniel Buren showing how art in public space can also a become place to play and interact with. 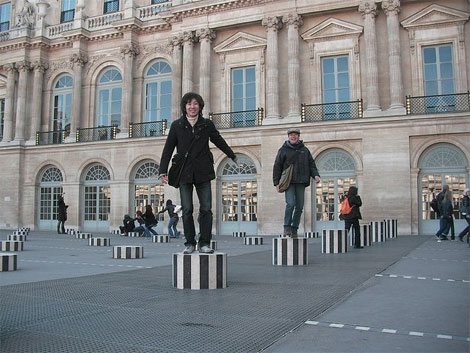 Elger also showed projects from his hometown Amsterdam – museumplein , a space that even though has no particular function, is being used by the citizens as a play area because it is well situated. A skateboard arena – as an example for an assigned space, then a branded space – i amsterdam which works as a city branding but also a tactile place where people are playing with the letters and taking pictures of themselves.

These examples made us re-think about what is playing? do we always need to have a specific infrastructure to play? What kind of encounters can games and playing create between people?

The results were very creative and diverse, and the participants laughed while experimenting with the letters, trying to figure out how to expres their thoughts using only a few tools.

1. The square is a place to exchange ideas and knowledge education and learning.“Can the square host a place where one can fix his car/bike?” Gudbrand Kjøs “The square should be a place where everyone can feel free to come and use it, also the subcultures, like the youngsters using their cars”.

2. The square is a place to exchange ideas, knowledge mingling with other people, bringing new features. ”Imagine a square where you can walk bare foot on the cobbled stone and get a relaxing foot massage” Rosalyn Aragon Arbiol

3. The square is a place for sitting and watching. We come together to watch, behave like a group and have the space: “What nakes a public space attractive for the people? Other people, we come to the city centre to see if anyone else is there..” Jørn-Atle Antonsen

4. The square is a place where programming is needed to define events and activities.“Imagine a big outdoor piano playing when you put money into it” Ingrid Blekastad

5. The square is a place that should be accessible for everyone. “We can use the church bell tower, together with the bells on the lake and the cultural centre to create ‘the sounds of Hamar”’ Tora Marie L. Joensen

Elger concluded the exercise with the following quote which I find very inspiring:
“Remember the Amsterdam logo we saw in the movie, maybe we can consider the dreamhamar logo also as city branding, but not in commercial tourist way but in a social communal way so that all the participants will be part of it”.