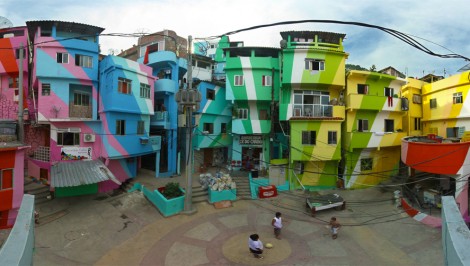 This project involves employing the inhabitants of a favela to paint their own houses according to a pre-arranged pattern. It turns their community into an artwork of epic scale and will produce an explosion of color, joyfully radiating into the world. It draws attention to the city’s deplorable social situation, while instilling pride and joy in the at the bottom of the social hierarchy.

Built in 1981 by renowned Egyptian architect Hassan Fathi to resemble the mosques of north and West Africa, Dar al Islam was originally intended to serve as the centerpiece of a community of schools and living quarters for North American Muslims. The planned village doesn’t exist, but the mosque has developed programs in connection with educational institutions to promote a better understanding of Islam. Retreats, study groups, and workshops there allow participants—Moslems and non-Moslems alike— to study with visiting scholars.

The mosque was built by and for a new experimental community, whose members received instruction from Fathy and his team of Nubian masons (who came to the USA specially for the purpose) in the low-technology building techniques of vault and dome construction used in upper Egypt.