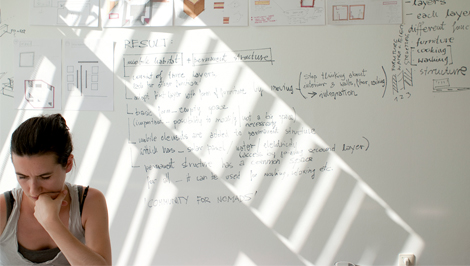 “Agata is an independent interior & furniture designer from Gdansk, Poland, currently based in Vigo, Spain, with a master’s degree in the field of architecture of interiors. She participated also in several workshops for example Bauhaus Live Workshop in Berlin 2010. She has been also invited to take part in 2nd Florence Design Week with project ‘New habitat for a contemporary nomads’. Her projects were selected in several open-calls: ‘did you see that?’ for International Architecture Festival EME3 (Barcelona 2011), ‘a city code_the subjective map’ for Strangelet Festival (Vigo 2011), “facade wall:in/out” for Platforma11 (Leipzig 2011). Nomadism, mobile architecture, modular furniture, multifunctional interiors and also balance&border between public and private space and people’s consciousness of their surrounding are in the center of her work. Agata also wrote some essays for digital magazine Engawa.”

Registration is closed for online workshops but you can follow the sessions live here at the scheduled days and times for each workshop.

28 Sep 2011 | Posted in Public Space and People by | Comments Off on Meet the online workshops participants: Agata Ruchlewicz-Dzianach